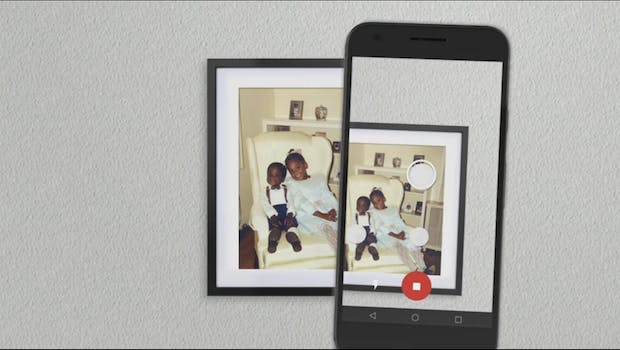 Google's Photo Scan app is the fast and easy way to scan old photos you never knew you wanted.

For the average person, a scanner doesn’t make much sense—that is until you need one. Google has released a new app called Photo Scan, and you best believe your mom is going to use it to put embarrassing old photos on Facebook.

Photo Scan gives you a high-quality scan of your old photographs by taking multiple captures of the image. First you fit the image to the frame in the viewfinder and take a photo. Then four white dots will appear on each corner of the photo you’re scanning. You move your phone to connect the dots, which will turn blue after they’re scanned. Once each dot has turned blue, your photo will be saved in the Photo Scan app.

The clarity of scanned photos is incredible. Even 15-year-old prints from high school look as good as they did on film. Photo Scan automatically fixes minor problems caused during the scanning process, like glare and exposure issues. When you’re done, Photo Scan will let you edit any changes that were made.

Photo Scan is faster than using a traditional scanner, free, and available for iOS and Android. Make sure to download it before you head home for the holidays. You can see the app in action below.