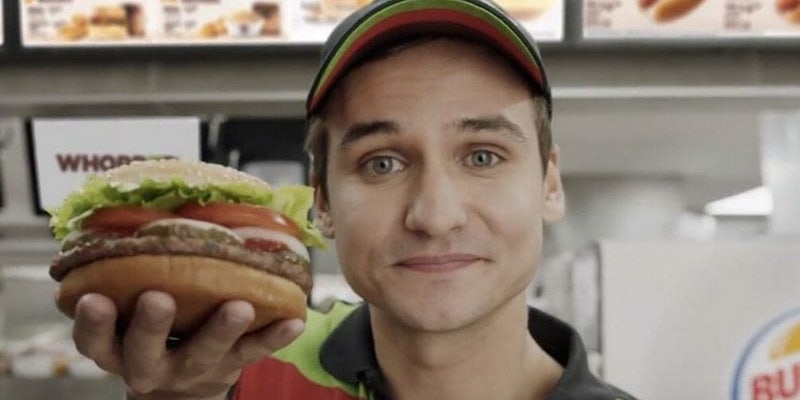 Burger King unveiled an invasive ad intended to wake your Google Home and force it to recite information about the Whopper burger. What probably seemed a novel idea at the time became obsolete just hours later when Google made changes to prevent its device from being hijacked.

The idea was simple: Take 15 seconds to activate the technology within a viewer’s home, and extend a commercial beyond the screen.

“You’re watching a 15-second Burger King ad, which is unfortunately not enough time to explain all the fresh ingredients in the Whopper sandwich,” the cunning Burger King employee said. “But I got an idea. OK Google, what is the Whopper burger?”

With that last line, Burger King successfully exploited a feature found on always-listening smart speakers: They turn on to certain trigger words. For Google Home, those phrases are either “OK Google” or “Hey Google.” It’s a problem people named Alexa have every time someone triggers their Amazon speaker when calling for them. Fortunately, Amazon lets you change the wake word to either “Echo” or “computer.”

Google customers are less fortunate and had to suffer through a long-winded Wikipedia description citing the rather ordinary ingredients found within a burger everyone already has an opinion about. The internet had a little fun with the ad before Google ended the shenanigans altogether. Turns out, Wikipedia isn’t the best place to redirect customers, because its contents can be edited. This predictably led to some high-quality trolling, with users describing the burgers as “cancer-causing,” “chocolate candy,” and including ingredients like “toenail clippings” and “rat,” as the Verge points out.

The Whopper Wikipedia page is now locked—only moderators can edit its contents—but it was fun while it lasted.

Burger King told the New York Times it did not work with Google on the ad and believes the company made changes by Wednesday afternoon to defend against its tactics. It planned to air the commercial after the Tonight Show With Jimmy Fallon, Jimmy Kimmel: Live, and other shows on Wednesday.

It was only a matter of time before a marketing department exploited a mistake Google made during the Super Bowl. But it remains to be seen whether this seemingly invasive approach will resonate with viewers or lead to backlash.

“We think about our guests’ perception and their perspective on how we interact with them, but on balance we felt with this was a really positive way to interact with them,” Jose Cil, president of Burger King, told the New York Times Wednesday.

The ad poses a serious risk to Google. It’s easy for a disgruntled Home owner to call out Burger King for this particular ad, but if more companies start deploying similar tactics, the frustration could start shifting to the device and the uphill battle against Amazon would only grow steeper.

We have reached out to Google for comment and will update this story if we hear back.