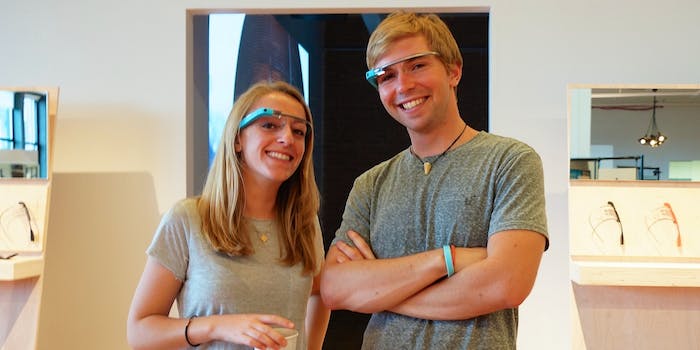 Google Glass would like to deliver you a chill pill.

Google Glass fans may soon be able to justify wearing the ridiculous headgear by claiming that they’re worried about their stress levels.

A team of researchers at MIT and the Georgia Institute of Technology has figured out how to use Glass’ accelerometer, gyroscope, and camera to measure the wearer’s pulse and breathing rate in a variety of conditions.

“This work has shown a new capability to provide accurate real-time heart-rate and respiration measures from a gyroscope worn above the eye, and using the combination of sensors available in today’s head-mounted wearable Google Glass,” the researchers say in their paper.

Each time the human heart beats, it pumps blood into the body’s great vessels. Measuring the movement within the body produced by this beating-and-pumping rhythm produces what is called a ballistocardiogram. Using a custom-built Android app and Glass’ built-in sensors, the MIT and Georgia Tech scientists were able to analyze this vital statistic, gaining insight into the constantly-changing stress levels of the human body.

Participants “held three different positions under relaxed and aroused (after biking) conditions for a minute each” while the researchers collected data. They found that the measurements from their app aligned with the “ground-truth” (that is, the easily observable reality).

The stress-monitoring experiment joins a growing list of medical applications for Google Glass. Startups are developing Glass apps for workflow management, operating checklists, and dermatological consultations. The University of California at Irvine is integrating Glass into its medical school curriculum. And a doctor in North Carolina performs surgeries while wearing the headset in order to assemble an archive of surgical procedure data.

According to MIT Technology Review, the scientists who co-authored the paper on stress monitoring are currently “working on several apps that would use this kind of data for practical purposes.” One of the paper’s authors is working with graduate students at Georgia Tech on “making an app that captures and analyzes the signals that were investigated in the study in real time.”