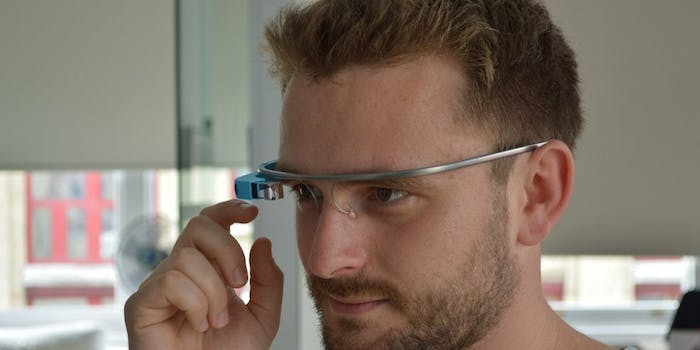 Google Glass app shows you what your partner sees during sex

Get ready to experience "intimate moments" from multiple perspectives.

Have you ever wanted to know what you look like during sex? Of course you haven’t, because you already know the answer to that question: Sweaty, red-faced, and like Andy Murray while he’s playing tennis. But in the event that you actually think you look good in the sack, here’s an app to prove you wrong: Glance, which shows what you and your partner look like while you’re having sex.

Essentially, Glance is a multiple-POV iPhone app that lets you watch two videos of the same event simultaneously, by recording with both back and front cameras and showing you “both sides, in the same place.”

While Glance is not explicitly designed to be used during sex, it was created during a London hackathon last year as a way to capture “intimate moments.” In case you need further convincing of Glance’s intended purpose, there are sultry black-and-white photos of couples tussling in bed:

All you and your partner have to do is put on your Google Glass, say “OK, Glass, it’s time,” and start recording the action. Glance will then record what you and your partner are seeing and stream it for the two of you in realtime. To tell Google Glass that your session is over, just say—wait for it—”OK, Glass, pull out.” The folks at Glance are a bunch of cheeky monkeys, it seems.

For starters, Glance is not the first app designed to record X-rated footage on Google Glass. That would be MiKandi’s Tits and Glass (NSFW), which allowed users to upload their own racy videos and browse adult content on Google Glass. Google yanked the app from its store shortly after release, due to its notoriously stringent restrictions on nudity and adult content. (You can now only see NSFW content on the Tits and Glass web app.)

It’s unclear whether Glance has been approved by Google’s team yet. Because Glance is not explicitly marketed as a pornographic app—its Apple Store page in particular makes it look like pretty much any other video-sharing app—it might be easier for it to win Google’s approval. But given Google’s demonstrated aversion to hosting NSFW content, it makes sense that they might look askance at the sultry, black-and-white boudoir photos on Glance’s website.

There’s also the question of privacy, or whether Glance is vulnerable to the same security issues that have plagued apps like Snapchat, which are often used for sharing naughty photos. Glance’s website says that unless couples choose to save their video, it’ll disappear into the ether, and that all videos are hosted on the couple’s phones, rather than in a centralized Glance database. We’ve all heard that song and dance from devs before.

The truth is, there just isn’t a foolproof way to protect your sexts and X-rated videos from prying eyes right now. But that certainly hasn’t stopped people from sharing their intimate photos and videos, so there might as well be an app like Glance to help them do so responsibly. It remains to be seen if stodgy tech juggernauts like Google feel the same way.

Update: We reached out to Jen McEwen, the co-founder of MiKandi, to get her thoughts on Google Glass and Glance. Here’s what she said:

I can’t speak for the creators of Glance, but I suspect they encountered the similar obstacles we did. The current business climate is very hostile to sextech companies. Often, companies, services, and apps like Glance and Tits & Glass find themselves either blocked or forced to pivot if they hope to utilize mainstream channels. I would be surprised if Google approved Glance as a sex app for Glass, but I hope they do. What we need are not more blanket restrictions on consensual adult activities, but more apps, services, and companies that empower adults to safely interact with each other without judgment.