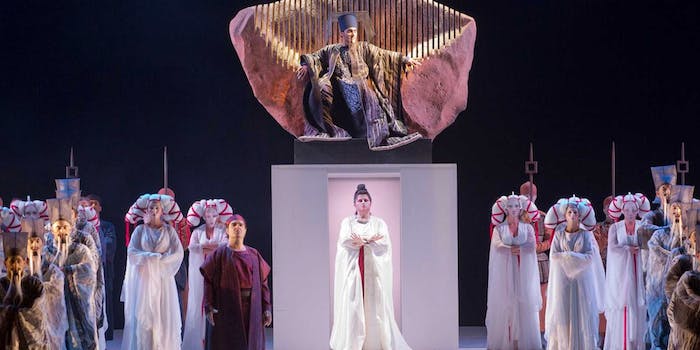 High art and high tech will collide today in Italy in one of the least likely appearances of Google Glass. The cast and crew of Sardinia’s Teatro Lirico di Cagliari will don Google Glass for a performance of Puccini’s three act opera Turandot, which begins its run on the Italian island today.

The Glass Opera Interactive experiment will begin at 9pm local, 3pm ET, though the opera group has already been busy with Glass, uploading images and clips of the prep work that goes into staging an opera classic.

Both those on stage and behind the scenes will be outfitted with Google’s futuretech eyewear and the performance will leverage a custom Glass app developed by TSC Labs.

According to a press release from Teatro Lirico: “The audience will be Able to see the performance from multiple points of view—from the soprano’s to the stagehand’s. The project of the Teatro Lirico in Cagliari is highly innovative. It is the first Opera House to host a Research and Technology Centre. Moreover it is the first to use Google Glasses During a live opera performance.”