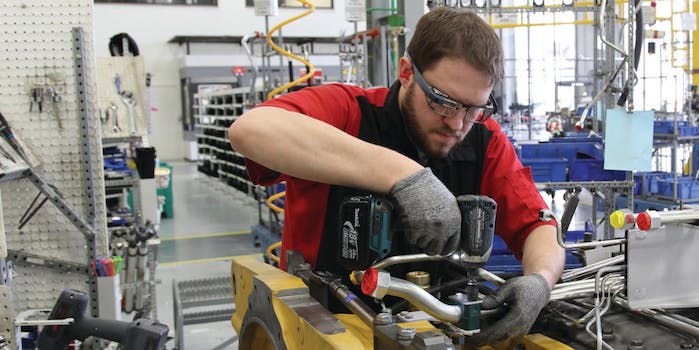 The head-mounted displays are already in the hands of several Fortune 500 companies.

Google Glass, the infamous head-mounted display plagued by software problems and privacy concerns, is getting an unexpected second chance after being all but phased out.

Just don’t expect to get your hands on one anytime soon.

Glass Enterprise Edition is the same headset the company sold to consumers back in 2012, except now it’s improved and optimized for factory work. Alphabet’s X division claims more than 50 companies are already using Glass to help speed up processes in different work settings.

The idea is that company employees can use the smart spectacles as a lightweight and convenient alternative to large how-to guides and instruction manuals. Instead of hauling books around or trying to remember different processes, workers can upload documents straight to Glass and follow along while they perform a specific task. It’s the same idea as using YouTube to guide you through tying a Windsor knot, except you don’t need to be near a laptop or awkwardly holding up your phone.

According to a report from Wired, Alphabet has only sold “hundreds of units,” but it’s worth noting the buyers, many of which are Fortune 500 companies like GE and Volkswagen.

Google Glass got a much-needed hardware upgrade during its time off. It now has a better, 8-megapixel cameras; longer battery life; an improved Wi-Fi module; and new red light that turns on when video recording—a feature that could have gone a long way to addressing the privacy concerns that stunted its consumer launch.

“This isn’t an experiment. It was an experiment three years ago,” Jay Kothari, project lead for Glass told Wired. “Now we are in full-on production with our customers and with our partners.”

Google remains bullish despite Glass’s tumultuous past, and it has good reason to be. A report from Forrester Research predicts that 14.4 million workers will be using “smart glasses” by 2025.