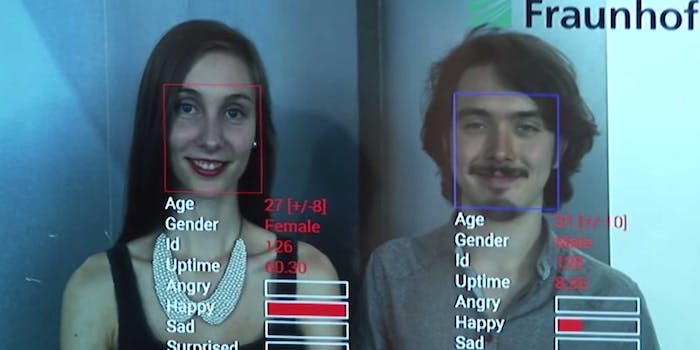 Google Glass app reads your face to determine your emotions

We’ve seen some creepy apps for Google Glass, but the SHORE Human Emotion Detector takes us closer to Skynet than we’ve ever been before.

A video from the institute shows a simulation of the technology running on Google Glass.

In addition to locating faces and analyzing expressions, Fraunhofer boasts that the technology can also identify a person’s age and gender. However, the video’s narrator says, “There is no recognition of faces, and none of the images leave the device.”

This is not the first time that a Google Glass app has attempted to analyze faces. Last December, a company called NameTag released an app that scans the contents of the FacialNetwork.com database to identify whomever the user is looking at. Billed as a defense against sex offenders and other miscreants, the app nonetheless drew the ire of Senator Al Franken (D-MN), who said in February it raised “serious concerns for personal safety and individual privacy.” (The company responded to Franken shortly thereafter.)

Still, SHORE’s facial analysis technology has the potential to be even creepier than NameTag’s because of its ability to read emotions and attitudes. If the NSA leaks of the past year and a half have taught us anything, it’s that the government is always interested in expanding its ability to use technology to watch and understand. Let’s just hope the U.S. government doesn’t enter into any “strategic partnerships” with Fraunhofer in the near future.