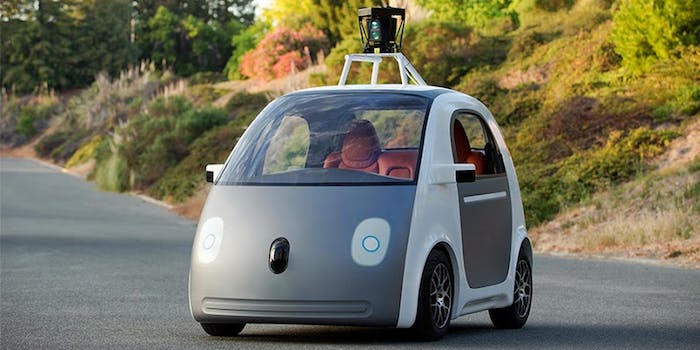 Steering wheels and brake pedals are so 20th century.

The future is now: Google announced Tuesday that it will build a 100-car fleet of dedicated self-driving cars that completely remove the need for a driver. In fact, the vehicle doesn’t even have a steering wheel.

Though the cars are prototypes, Google’s driverless car team says it plans to prepare them for a wider public release “over the next few years.”

Previously, Google has retrofitted existing cars with cameras and sensors. However, this is the first time they have a created a purpose-built, self-driving vehicle.

The car has a sensor built on top of it which detects objects up to 600 feet in front of it, and currently has a top speed of only 25 MPH, but just “for these first vehicles,” according to Google. This current prototype doesn’t have a steering wheel, accelerator pedal, or brake pedal; but they’d need them to drive in the company’s home state of California, given current driving regulations.

The only manual application the car comes with, in fact, is a on/off button (the off button is for emergencies).

The cars can also be summoned by an app. Passengers may then input directions (we’re guessing, with Google Maps) to wherever the he or she needs to go.

A video released on their blog shows the car in the action, as well as the first group of people outside of Google experiencing the newly built prototype—and they’re ecstatic about it.

In the blog post announcing the cars, director of the self-driving car project, Chris Urmson, says that they’ll be looking now to run a pilot program. These tested prototypes will have manual controls, in order to comply with California’s “Automated-driving regulations,” which were issued on May 20.

Urmson says he has high hopes for this technology, and called it “an important step toward improving road safety and transforming mobility for millions of people.” He also lists potential useful scenarios, such as helping the elderly get out of the house and preventing drunk-driving incidents.

If things go as planned, Urmson says they plan to work with a partner organisation to produce the vehicles in larger numbers.

Brin’s prediction in 2012 that driverless cars would be with us in five years looks like it was right on the money—if not a bit pessimistic.