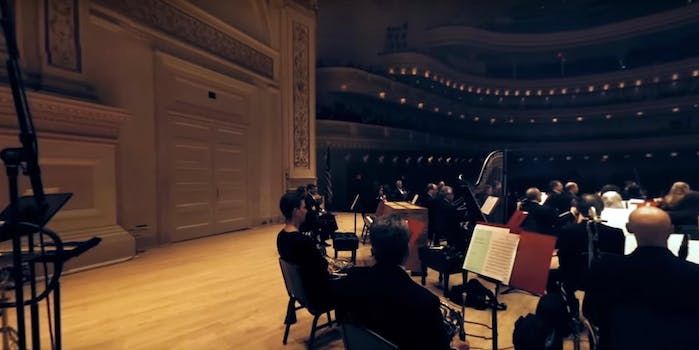 It's cheaper than getting a ticket.

Want to catch a show at Carnegie Hall? Thanks to a new initiative from Google, you can have the best seat in the house without ever getting off your couch.

The search giant recently launched Performing Arts, the latest program under the Google Cultural Institute umbrella, as a way to give people an unprecedented view of performances at some of the most impressive venues in the world.

Google constructed camera rigs tailored for the purposes of capturing every angle of a performance. Working with tech teams at venues like Carnegie Hall, the Berliner Philharmoniker, the Royal Shakespeare Company, and the Theatro Municipal of São Paulo, Google equipped the theaters with the custom-made technology required to record each event.

Users can explore each recorded event from 360 degrees, clicking and dragging on their screens to adjust the viewing angle a la Google Street View.

Whether it’s watching a performance of “In the Hall of the Mountain King” from the orchestra seats or a Royal Shakespeare Company dress rehearsal of Henry V, you’ll be able to move and see it all as if you were right on stage.

Google landed the performances after discussions between the company and the institutions hosting them. Performing Arts is part of the expanding efforts of Google in the cultural sector, which the company hopes will continue with additional partnerships that will display cultural disciplines from different parts of the world.