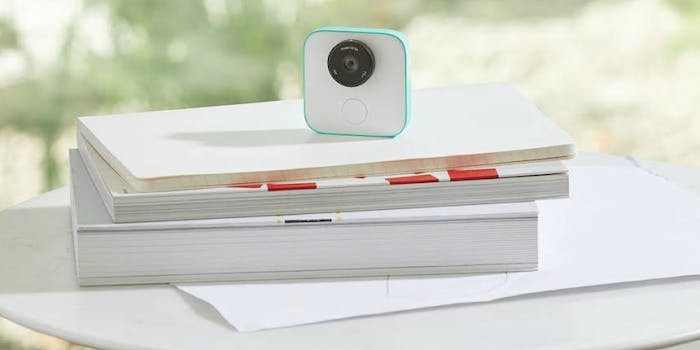 Google Clips is Google’s answer to the GoPro

Somewhere between the GoPro and the smartphone lies the body camera. You can use one to quickly capture moments from your everyday life or record special events, hands-free. At its Oct. 4 event, Google surprised us by debuting a body camera of its own called Google Clips.

Google Clips is a clip-on body camera that shoots 12-megapixel images with a 130-degree field of view. Unlike traditional body or sports cameras, though, Clips is all about smart capture, fueled by AI. You can wear Google Clips, or set it on a surface, and the device will automatically record soundless clips of pets and faces that it recognizes. When it’s on, a blinking LED alerts those in the vicinity that it’s recording.

The device is small—just under two-square inches—and weighs only two ounces. It can shoot up to three hours of footage at 15 FPS, in the form of photos, videos, and GIFs. It has 16 GB of onboard storage and data transfer via Wi-Fi (it’ll upload to Google Photos automatically, where you’ll get free video storage). The camera charges via USB-C, and connects to your phone and the accompany Google Clips app.

To turn on the camera, you simply twist its shutter. Below its protruding shutter is a manual button for snapping photos, too.

Hopefully, being blatantly a camera, it’ll fare better than Google’s last wearable camera attempt in Google Glass. Google Clips, while it can be worn, can also just sit in your living room, a baby’s room, or anywhere else you may want to record images or video. It does not record sound, however. If you want to capture baby’s first words, you’ll want to whip your smartphone out instead.

The Google Clips camera will be available for $249 through the Google Store. While it’s not shipping yet, you can join the waitlist here.