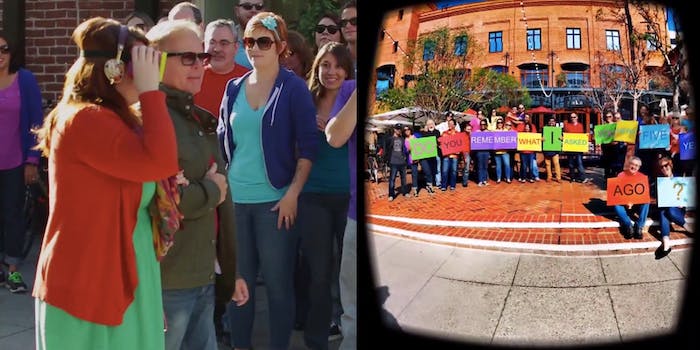 How a virtual reality headset sparked a viral proposal.

When thinking about the uses for virtual reality headsets, marriage proposals have to be low on the list. But because proposing to your partner is becoming more of a performance that can be captured on video and broadcast to viral stardom than an intimate moment between two people, it only makes sense that Google Cardboard would factor into this process sooner than later.

Mike wanted to propose to his girlfriend Maggie in a clever way, so he took her to the spot where, five years ago, he jokingly asked if she would marry him. When she got to the park-like enclave, there was a box which contained Google Cardboard, a virtual reality headset, and a pair of headphones.

Maggie put Cardboard over her eyes and saw her friends holding signs in the same place she was standing. Earlier, Mike had filmed their friends with the posters in their hands that read, “Do you remember what I asked you here five years ago?”

Unbeknownst to his future bride, Mike had invited all those friends back to do a big group dance to “Kiss the Girl” from The Little Mermaid. It’s worth noting, too, that Mike’s giant surprise, while technical, is also a massive organizational undertaking. Kudos to all those people who showed up twice to help with this elaborate scheme—you are the true heroes in this story.

It’s all an elaborate way to ask someone to marry you. But hey, in the age of viral wedding videos and virtual reality, why not work with the tech you have to make something your partner will never forget? As long as that’s what they want.