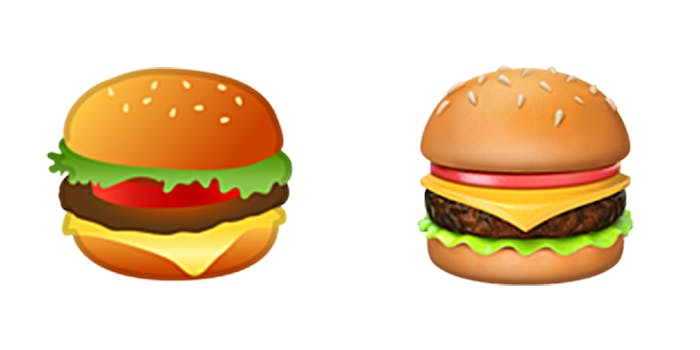 Google just released its Pixel 2 and Apple is set to ship the iPhone X in a few days, setting up an intense showdown between two adored tech giants. But it’s not the predictable iOS or Android argument that put social media in a frenzy over the weekend. No, the subject of this Apple vs. Google debate was much more serious: a burger emoji.

Author and media analyst Thomas Baekdal started the debate on Friday with a tweet that revealed how Google and Apple place the ingredients on their digital burgers.

I think we need to have a discussion about how Google's burger emoji is placing the cheese underneath the burger, while Apple puts it on top pic.twitter.com/PgXmCkY3Yc

The placement of these ingredients sparked an intense discussion on Twitter, with Baekdal’s tweet reaching more than 4 million users. Most people seemed OK with Apple’s approach, though a few complained about the lettuce sitting under the patty. But no one could stomach Google’s monstrosity.

People became so enraged and disgusted by the thought of a dry bun with caked-on cheese that Google’s CEO Sundar Pichai said the company would “drop everything” and address the issue “on Monday” if people can figure out the correct order.

Will drop everything else we are doing and address on Monday:) if folks can agree on the correct way to do this! https://t.co/dXRuZnX1Ag

So what is that order? Baekdal says he searched several burger recipes from renowned chefs but discovered that everyone prepares them differently. That leaves it up to Twitter to fix Google’s error. The general consensus is that the cheese needs to melt on the patty and the lettuce should go over the tomato. Google and Apple were both wrong.

A quick look at Emojipedia shows that Microsoft and Facebook are the only ones that know how to construct a cheeseburger.

It wasn’t just Google and Apple that missed the mark. LG forgot the tomato.

And Samsung put the cheese on top of the lettuce, defying all culinary logic.

Where do we even start with Mozilla’s abomination?

We will update this if and when Google releases the revision.

Unfortunately, only those with Google’s Pixel phones (or older Nexus devices) can update to the latest software version today. Other Android users are at the mercy of their phone manufacturers.