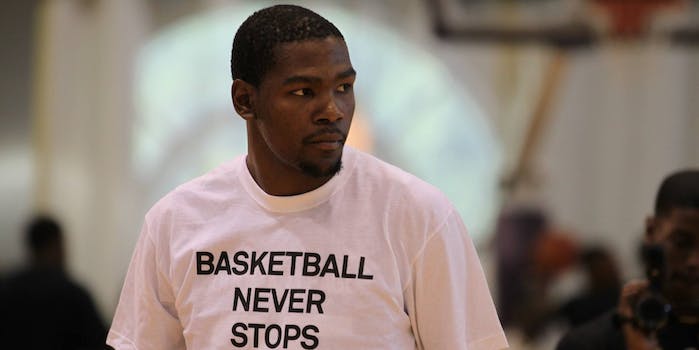 Also helpful: being arguably one of the best teams in history.

Basketball fans may still have trouble imagining what Kevin Durant will look like in a Warriors uniform, but the former Oklahoma City star had no difficulties picturing life in the Bay Area thanks to a virtual reality presentation the team used to woo him.

According to a report from USA Today, part of Golden State’s two-hour pitch to the former NBA MVP included having him strap on a pair of VR goggles and glance into the future.

Displayed inside the headset were images of the Golden Gate Bridge, views from within the Warriors practice facility, a courtside look at Oracle Arena, and footage of the team’s head coach Steve Kerr speaking with the team in the locker room. It was all designed to give Durant the ability to visualize what his career would consist of if he made the move to Oakland.

Accompanying the visual aspect were the soothing sounds of Drake. The song “Big Rings” played in the background as the Warriors hoped the lyrics would seep into Durant’s subconscious as Drake raps, “I got a really big team, and they need some really big rings,” and “Are we talking teams? Oh, you switching sides? Wanna come with me?”

Though it wasn’t seen through the goggles, the presentation also gave Durant a glimpse of the Silicon Valley culture that is ingrained in the Warriors by team majority owner and venture capitalist Joe Lacob.

The video was crafted by virtual reality firm NextVR, a frequent contributor with the Warriors and other sports franchises used to create new visual experiences for fans. The company also claims to be the only capable of transmitting high definition, three-dimensional virtual reality footage live over the web.

NextVR is just one of the many tech companies that have a relationship with the Warriors, and the team has been happy to embrace the management style of the Silicon Valley businesses that surround it. Earlier this year, Lacob claimed the team was “light-years ahead” of its competition thanks to the team’s embrace of the Valley. The team fell short of it’s second NBA title this year, losing to the Cleveland Cavaliers.