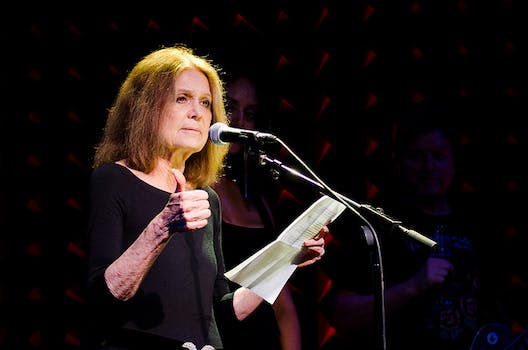 She calls it a case of 'talk-show Interruptus.'

Gloria Steinem is arguably the world’s most recognizable feminist icon, but this weekend she came under attack for some decidedly anti-feminist comments about why young women are choosing to vote for Bernie Sanders. Now she’s responding to her critics and apologizing to the women she’s championed for decades.

In a Friday appearance on Real Time with Bill Maher, Steinem promoted her new book My Life on the Road and weighed in on the current state of feminism. When Maher asked her why young women weren’t coming out in droves to support Hillary Clinton, she replied, “When you’re young, you’re thinking, ‘Where are the boys? The boys are with Bernie.’”

Not many things surprise Maher, but this comment seemed to strike him as odd. He replied: “Oh. Now if I said that, ‘They’re for Bernie because that’s where the boys are,’ you’d swat me.”

It was unexpected to hear Steinem imply that young women vote based on hormones: It also ignores the fact that not all women are interested in men. The moment was oddly reminiscent of when Fox News host Kimberly Guilfoyle stated in 2014 that young women should be excused from jury duty “so they can go back on Tinder or Match.com.”

While Steinem didn’t seem bothered by her own comments in the moment, on Sunday she took to Facebook to explain herself and apologize.

Steinem wasn’t the only one who might have gone a bit too far in her quest to get a woman to the White House. Former Secretary of State Madeleine Albright introduced Clinton at a rally in New Hampshire on Saturday and in her remarks she said, “There’s a special place in hell for women who don’t help each other!”

That could be true. But Clinton herself may be in hell if she alienates this next generation of female leaders.