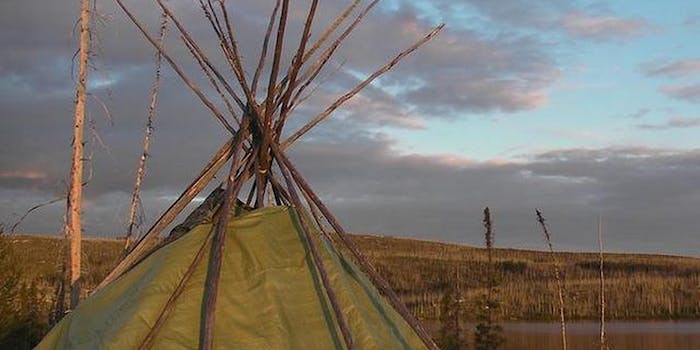 Company defends its use of teepee, ‘stereotypical’ outfits at gaming conference

Last week, the Game Developers Conference took place in San Francisco. One of the people in attendance was writer, researcher, and game developer Elizabeth LaPensée, who encountered a teepee on the expo floor. It belonged to Glispa, a company that helps “generate mobile and web traffic that matters.”

Outside the teepee stood two non-Native women, according to LaPensée, dressed in “stereotypical” traditional garb and inviting conference-goers inside. LaPensée took a picture and uploaded it to Facebook on March 20. On Monday, the website Indian Country reported on her photo, and the subsequent response from Glispa’s CEO, Gary Lin. 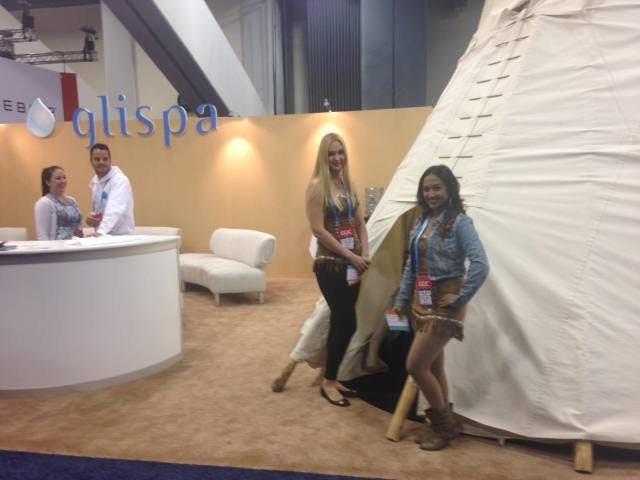 While LaPensée decided to not personally engage with Glispa, she passed the issue along to writer and activist Jacqueline Keeler and other leaders in the community who are “better prepared to follow through with education and reconciliation.” LaPensée’s friend Melissa Bennett did get in touch with Lin.

On her blog, Bennett explains she took a closer look at the Glispa website, and saw references to further cultural appropriation: a tagline boasting Glispa as “your online rainmaker,” and development teams named after Native American tribes. She emailed Lin to ask about these depictions, and received a quick response, which she posted:

I founded the company in the US over a decade ago and this is the first time I have received such a complaint. I am a Chinese-American and understand the sensitivities around race and culture fully. I was born in the midwest and have many Native American friends. The name glispa comes from Navajo mythology and we have adopted many of the values of Native American culture in our company philosophy. In the beginning some of these teachings were the driving principles behind the company philosophy. We had no intention of offending anyone and “racist” is a strong remark. While the depiction may not be accurate, we all stem from indigenous people and cultures. Our company currently has over 35 nationalities and teams recognize the tribes from where they were born. We celebrate the differences as well as the blending of these roots.  I apologize if this has been misinterpreted and I wish you would have formally contacted us before spreading your complaint around. I’m surprised that no one has complained about the other companies at this event who show scenes of different nations killing one another in war depictions – but I guess this is a gaming conference.”

Of course, “adopting” the values of another culture into your corporate thinkspeak isn’t the same as “understanding” or “respecting” them. There’s certainly a hint of condescension in his remark about how Bennett should have run this past him before spreading her “complaint.” Bennett felt it was dismissive as well:

“It felt like he didn’t hear me. It felt like another example of a non-Indian person telling an Indian person what should and shouldn’t be offensive about their own cultures. And he was using his own identity as a person of color along with his “Native American friends” to somehow make it okay. Mr. Lin, it is not now, nor has it ever been okay.”

This speaks to a larger issue about Native depictions not just in gaming, but in entertainment and media. Rooney Mara’s casting as Native American princess Tiger Lilly in yet another Peter Pan remake was met with controversy, and a hashtag, #NotYourTigerlily, which went beyond Mara into issues of Native identity and representation.

LaPensée, who is of Anishinaabe and Métis heritage, has been writing about depictions of Indigenous peoples in gaming for a decade, and eventually moved on to designing games.

“It became clear to me that I needed to step in to actively change these representations,” she says, “and so I began designing games, coordinating game development workshops for Native youth, and setting a path to get a Ph.D. so that I could support research and development of Indigenous games.”

She set up development workshops for Native youth, in an effort to tell real stories through video games. In a piece from 2010, she discussed the themes of sexualization of Indigenous women in games.

“Most Indigenous representations in video games are drawn from existing stereotypes in other media,” she says. “UbiSoft is one of few game companies who have offered a model by involving consultants and community members in the depictions in Assassin’s Creed III.”

Native Representations in Video Games (2011) from Elizabeth LaPensée on Vimeo.

She hopes more game developers adopt this model, and more Native Americans take jobs in the gaming industry. If so, perhaps that’s one step toward making games—and the conferences surrounding them—more inclusive.