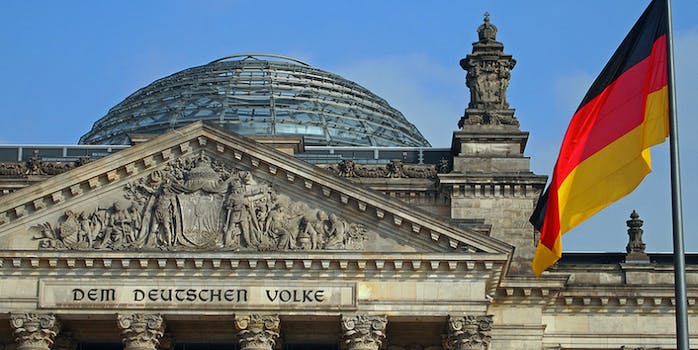 But will Germany break ties with one of their its contractors?

Incensed over collusion between U.S. tech companies and American intelligence agencies, the German government plans to cut ties with firms that share secrets with the U.S. government—with one notable exception.

Amid the din of international backlash against U.S. spying, Germany has been one of the most vocal critics. Anger with the U.S. hit a fever pitch last fall when it was revealed that American spies had tapped the personal phone of German Chancellor Angela Merkel. And even though the German government has been implicated in collaborating with the National Security Agency (NSA) to spy on its own citizens, politicians there are eager to make a show of protecting privacy rights.

According to Worldcrunch—citing research from German news outlets Süddeutsche Zeitung and NDR—the ruling “black-red” coalition government is modifying the rules under which it awards public IT contracts. Companies competing for government work will now have to sign documents stating “to the effect that no contracts or laws oblige them – nor can they be coerced – to pass on confidential data to foreign secret services or security authorities.”

By refusing to do business with companies that fall under the long reach of the NSA and other American intelligence agencies, the German government should be able to free it’s citizens—in theory.

However, even glossing over the fact that many Germans will still used American Internet services on their own, skeptics wonder if the government can actually break itself completely from all American contractors.

Worldcrunch’s Frederik Obermaier and Benedikt Strunz point toward the German government’s close ties to subsidiaries of the American Computer Sciences Corporation (CSC). CSC is a firm based in Falls Church, Va., just outside Washington. With more than 80,000 employees, it is among the world’s largest outsourcing firms, providing IT services to numerous private companies as well as domestic and foreign government agencies.

In Germany, subsidiary firms of CSC are responsible for more than 100 federal and state contracts related to data collection, a “state Trojan” program for spying on citizens, and an electronic filing system for the Federal Supreme Court, among other projects.

Perhaps most troubling to German privacy and human rights advocates was the role a CSC firm played in the extraordinary rendition of Khaled el-Masri, a Kuwaiti-born German citizen who was abducted and held by CIA agents for four months in 2004. El-Masri was caught up in a wave of post-9/11 detentions, mistakenly taken by authorities because his name was similar to that of a suspected terrorist. A European Court of Human Rights ruled in 2012 that el-Masri’s treatment at the hands of CIA agents amounted to torture.

Yet even in the wake of that scandal, German governments have continued to do business with CSC, noting that the company was never convicted of any criminal wrongdoing for its role in el-Masri’s capture. And critics question whether these new rules for government contracts will have any real impact on the CSC’s relationship with the state.

“The powers that be at CSC point to the fact that the German subsidiaries ‘have no contractual relation to the U.S. government,'” Worldcrunch writes. “Business with American secret services is conducted by ‘a separate, independent business arm headquartered in the United States.’ But just how separate can the business of subsidiaries of the same firm really be?”