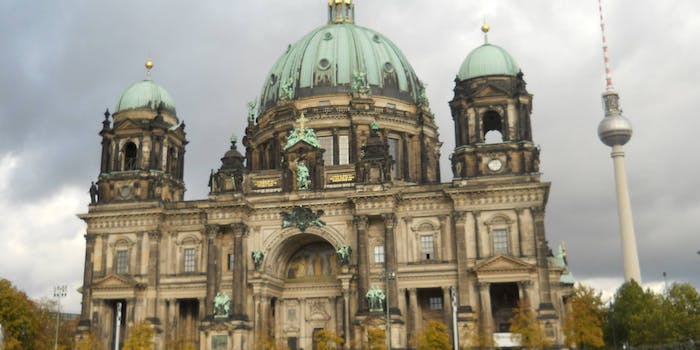 And the Lord said, "let there be internet," and there was internet.

It took the Lord six days to create all of existence. On the seventh day, He rested and called his local internet service provider, and they told him they would be around to install is service between A.D. 0 and 2500. That day has finally arrived, and now churches throughout Germany are equipped with free Wi-Fi.

The “Godspots” will be available in 220 churches in and around Berlin, Germany. The Evangelical Church Berlin-Brandenburg-Silesian Upper Lusatia, the body that originated the idea, plan to expand the number of connections to 3,000 churches, community centers, and religious institutions by May 2017.

The plan was timed to the 500th anniversary of Martin Luther’s Reformation, which is set to take place next year on October 31. The famous German professor of theology had taken issue with the church and, the story goes, nailed a list of proposed changes to end abuses of power and indulgence within the church called the Ninety-five Theses to the door of All Saints’ Church in Wittenberg, Germany.

The expansion of Wi-Fi throughout religious buildings throughout Germany might not seem as radical as Luther’s reforms, but it would represent a considerable change in the landscape of accessible internet in the country.

Free Wi-Fi is nearly non-existent thanks to strict anti-piracy laws that hold the owner of a wireless hotspot accountable for any copyright violations that trace back to the network.

According to a study by the Association of the Internet Industry, Germany has about 15,000 free Wi-Fi hotspots in total. That works out to about one for every 10,000 people. By comparison, the United States has five times as many free hotspots per person; the United Kingdom has 28 times as many.

Godspots also solve another problem, though one less impactful on the public: no one is going to church in Germany. According to research conducted by NORC at the University of Chicago, 52 percent of residents of the former East Germany identify as atheists; only eight percent of people in the region has a strong belief in God.

As a result of the God desert, churches have taken a considerable hit in the pews. Just 12.3 percent of Germans Catholics regularly attend church, and only four percent of Protestants attended church on Good Friday in 2013, according to a report published by Die Welt.

The addition of a Wi-Fi hotspot in the church will likely bring more bodies inside the steepled buildings than the average sermon does. Next up on the list of reforms: all prayers are to be 140 characters or less.