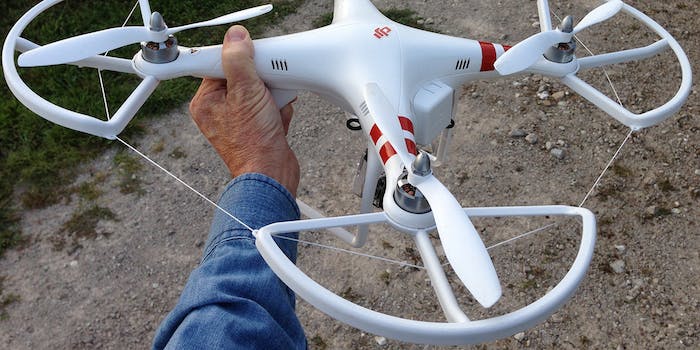 This case illustrates why drone regulations are so complicated

We're still no closer to a satisfactory set of rules governing drone usage.

In a textbook example of the murkiness of drone law, an Australian woman has been fined $1,700 after a drone she was piloting crashed into a triathlon runner in April 2014.

Warren Adams’ unmanned aerial vehicle (UAV) was hovering over a West Australian triathalon, operated by unnamed 20-year-old woman, when the woman lost control of the craft and it slammed into triathlon runner Raiji Ogden, causing injuries and “rivers of blood.”

Adams had argued that the machine didn’t hit Ogden and that she had dropped to the floor out of surprise, but Ogden refuted this an interview with the West Australian, saying she sustained “lacerations on my head from the drone and the ambulance crew took a piece of propeller from my head.”

After the Commonwealth Director of Public Prosecutions (CDPP) declined to press charges against Warren earlier this week, the drone owner posted on social media, “Sorry to all those who thought they could charge me ha ha you idiots!!!”

The response was “insensitive to [Ogden],” said triathlon club president Simon Teakle, and was “certainly not the way I would have responded.”

CDPP’s decision not to prosecute exposes the complicated nature of establishing a legal framework for this new type of aircraft. CDPP said its action—or rather, its inaction—hinged on the fact that “the evidence indicated that the case of the incident was not the actions of the operator but rather radio interference to the [drone] caused by the event’s timing device.”

The radio interference finding backs up Warren’s claim about an interruption in remote operation of the drone.

Despite the CDPP report, the Australian regulatory body CASA has decided to push ahead with a fine, though it is targeting the young woman operating the drone rather than Warren himself. The operator must pay the $1,700 fine “for flying the drone within 30 metres of people,” ABC news reports.

The case highlights the legal quagmire that currently surrounds UAVs: While drone usage is rapidly increasing, a great deal of uncertainty still exists over their acceptable use, including which party is legally culpable when something goes wrong.

While Ogden has made a full recovery, the grim reality is that it may not be too long before the first death from a civilian drone. Hopefully at least some of the legal grey areas for drone usage have been resolved by then.