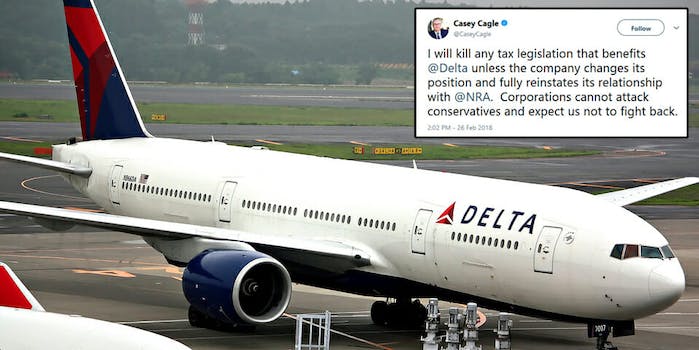 Georgia Republicans are going to bat for the NRA against Delta

Georgia Republicans are following the lead of Lt. Governor Casey Cagle (R) and pulling support for a tax break bill for Delta Airlines following its announcement that National Rifle Association (NRA) members would no longer get discounts.

On Monday, Cagle, who has an A+ rating from the NRA, tweeted that he would “kill” any tax legislation benefiting Delta unless it restored the discounts and its “relationship” with the NRA.

I will kill any tax legislation that benefits @Delta unless the company changes its position and fully reinstates its relationship with @NRA. Corporations cannot attack conservatives and expect us not to fight back.

Other Republicans in Georgia seem to have taken Cagle’s threat to heart by pulling support for a bill that would grant $50 million in sales tax exemptions on jet fuel, according to the New York Times. The airline is one of the largest employers in Georgia.

Delta is one of several companies that have severed ties with the NRA following the pushback against the organization following the school shooting at Marjory Stoneman Douglas High School in Parkland, Florida earlier this month. #BoycottNRA was trending on Twitter late last week.

“Let it be absolutely clear,” the NRA said in a statement over the weekend regarding companies pulling back perks for its members. “The loss of a discount will neither scare nor distract one single NRA member from our mission to stand and defend the individual freedoms that have always made America the greatest nation in the world.”

I'm no lawyer, but this seems like supplying Delta with a ton of legal ammunition next time they face any kind of adverse move by state government. https://t.co/ealVPYGmHq

That might cause Delta to move out of state and cost people in Georgia thousands of jobs, but I guess we’ve already learned that some politicians value guns over people. https://t.co/zJUJa1HMvf

You can read more about the Georgia Republicans push back here.