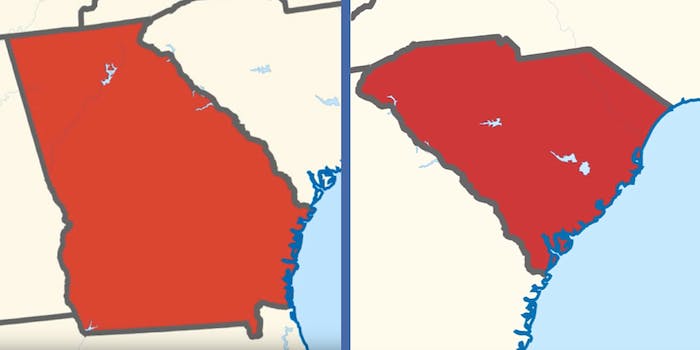 Can the Democrats actually win this time?

On Tuesday, voters will cast their ballots to replace House of Representative members in Georgia and South Carolina who were named to President Donald Trump’s cabinet—and Democrats are hungry for a win—a real one this time.

At least one election—for Georgia’s 6th Congressional District—is seen as a potential barometer for what can be expected heading into the 2018 midterm elections, where more than 30 of the 100 seats in the Senate will be contested and all 435 seats in the House of Representatives will be up for grabs.

As anti-Trump sentiment continues to fuel Democrats, Georgia’s 6th District race between Democrat Jon Ossoff and Republican Karen Handel has become something of an experimental testing zone for Democrats as they devise a strategy on how to capitalize on Trump’s historically low approval ratings.

History might be on the Democrats side heading into 2018. Presidents who retain a majority approval rating at the time of the midterms are much less likely to see their party suffer losses in the Senate and House, according to Gallup. And Trump’s approval rating is at historic lows. House Democrats also have seen huge increases in the amount of money they have been able to raise.

Let’s take a look at the two elections and why you should care about them.

Interest in the race is apparently at presidential-race levels, according to recent polls.

As mentioned earlier, the race is seen as litmus test for what the political mood heading into 2018—so much so, that it has become the most expensive U.S. House race in history. Ossoff and Handel are hoping to take the seat of Tom Price, whom Trump named secretary of Health and Human Services.

Democrats are hoping to flip the district, which has been held by Republicans since 1979, according to Ballotpedia. The candidates have spent more than $40 million combined in their effort to win the seat, with Ossoff raising nearly double the amount as Handel, according to the website.

Ossoff is a first-time candidate while Handel served as Georgia’s secretary of state.

Two recent polls had Ossoff taking the district by a several point margin. The Atlanta-Journal Constitution found Ossoff with a seven-point lead over Handel, 51 to 44 percent. The margin of error in the poll was four percentage points.

A second poll found Ossoff leading 49.6 percent to 47.1 percent, with a margin of error of 5 percent.

On average, Ossoff leads Handel by 2.8 percentage points, according to Real Clear Politics‘ calculation. But many believe, according to Politico, that it’s on track to be a “nail-biting finish.”

The run-off election had its own drama on the Republican side. Norman squared off against Tommy Pope on May 17 and unofficial results showed him winning the Republican nomination by 203 votes. An automatic recount was called and Norman won again by a margin of 221 votes.

Parnell and Norman will compete to take the seat of Mick Mulvaney, who is now Trump’s director of the U.S. Office of Management and Budget.

Like Ossoff, Parnell has never run for office before. While the district has typically gone to Republicans, South Carolina Democrats are hoping it can mobilize voters—pointing to the recent special election in Kansas where a Democrat lost by 7.2 points in a district that is heavily Republican, according to the Washington Post.

Norman is heavily favored to win. An internal poll released by Parnell’s campaign in May showed him trailing the Republican nominee by 10 percentage points, up from 16 points in March.