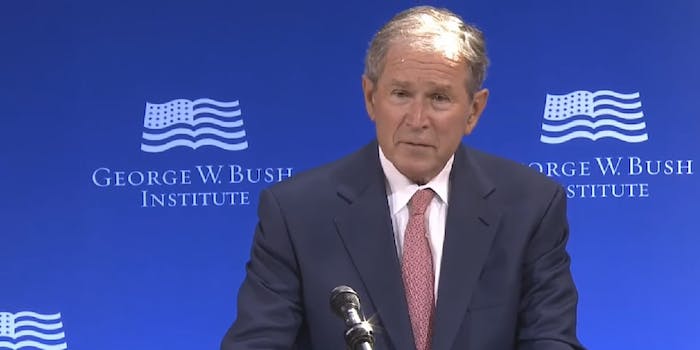 Bush never mentioned Trump by name. He didn't have to.

Former President George W. Bush made veiled but pointed criticisms of President Donald Trump and many of the elements that have emerged during his tenure in office, saying that bigotry seems to be “emboldened” and denouncing nationalism.

Bush, giving a speech at the George W. Bush Institute in New York, also touched on Russia’s meddling in the 2016 election and how the American dream seems “out of reach” for many Americans.

Without naming Trump or his administration, Bush criticized many of the themes that have emerged since his rise to prevalence, inducing the “alt-right,” a far-right contingent that champions nationalistic and white supremacist views.

Bush, who has mostly stayed out of the public spotlight since leaving office, focused squarely on some of Trump’s biggest talking points: “America first” thinking and a hard-line on immigration.

“At times it can seem like the forces pulling us apart are stronger than the forces binding us together,” he said. “Argument turns too easily into animosity. Disagreement escalates into dehumanization. … We’ve seen nationalism distorted into nativism. Forgotten the dynamism that immigration has always brought to America.”

Bush, whose presidency also drew widespread condemnation from Democrats and others on the left, also touched on Russia’s interference in the 2016 election, saying the United States needs to show “resolve and resilience” in the face of “cyber threats” in the future.

“According to our intelligence services, the Russian government has made a project of turning Americans against each other,” he said. “This effort is broad, systemic, and stealthy. It’s conducted across a range of social-media platforms. Ultimately, this assault won’t succeed. But foreign aggressions, including cyberattacks, disinformation, and financial influence, should never be downplayed or tolerated.”