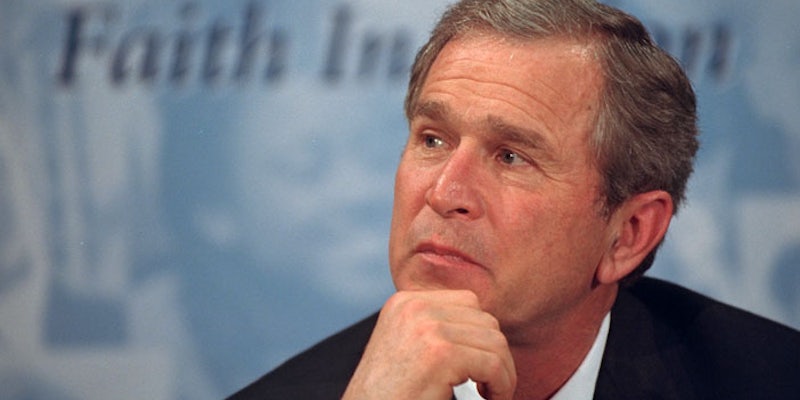 Back in the days before everyone realized Kanye West was a crazy person capable of writing an entire album about how he didn’t get enough credit for inventing leather jogging pants, the rapper appeared on a telethon raising money for the victims of Hurricane Katrina and declared that President George W. Bush “doesn’t care about black people.”

While Bush thought the charge was deeply unfair and inaccurate, even calling the comment the “worst moment” of his presidency, the criticism resonated with a lot of Americans, who felt that the president’s tenure in office hadn’t shown him to be particularly sensitive to the matter of race.

Yet, when Bush gave an interview with CNN’s Candy Crowley earlier this week, even he seemed to be having trouble making sense of why a New York City grand jury declined to indict NYPD officer Daniel Pantaleo for choking an African American man named Eric Garner to death, an incident captured in a shocking video that’s circulated widely on social media.

“There are those who say that race seems to be more of a problem with what a lot of people term a ‘post-racial presidency,'” asked Crowley, who recently announced her departure from the cable news network after 27 years. “When you saw what happened in the streets of New York in the video, what did you think?”

“I thought, how sad,” said Bush, who has largely stayed out of the limelight since leaving the Oval Office in 2008. “The verdict was hard to understand, but I haven’t seen all the details. But it’s sad that race continues to play such an emotional, divisive part of life. I remember back when I was a kid in the ’70s with race riots with cities being burned. I do think we’ve improved.”

He continued by recounting a recent dinner conversation he had with former Secretary of State Condoleezza Rice. “She just said, ‘You got to understand that there are a lot of black folks around who are more and more distrusting of law enforcement.’ Which is a shame because law enforcement’s job is to protect everybody.”

Bush isn’t the only person on the right to be shocked and upset about the non-indictment. Conservative Fox News contributor Charles Krauthammer called the decision “totally incomprehensible.”

Even so, many Republican officials have attempted to explain what happened as something that had little to do with race. Sen. Rand Paul (R- Ky.) insisted that the main factor behind Garner’s death was New York City’s tax on cigarettes and Rep. Peter King (R-N.Y.) blamed the victim being overweight and asthmatic for his death.