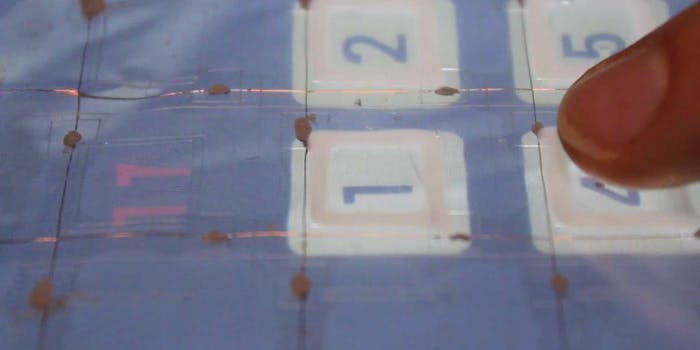 A new gel-based display turns a touchscreen into physical buttons

This touchscreen has a different feel.

Touchscreens have become the primary way many people interact with the Internet, but we still haven’t worked out all the kinks when it comes to typing. That’s why German researchers are developing a gel-covered touchscreen that gives you physical buttons when you need them.

Researchers at Technische Universität Berlin in Germany have created the prototype touchscreen, which features a gel overlay that can harden when heat is applied. This creates a temporary button in any size and shape, that doesn’t have to exist in advance but rather appears when needed.

The prototype touchscreen, dubbed GelTouch, uses heat-responsive hydrogel that is essentially unnoticeable until it is heated above 90 degrees. The heat evaporates the water from the jelly-like material and makes it 25 times stiffer. When heated, the area loses its transparent appearance and becomes a firm, white substance.

GelTouch’s screen returns to its original state once the heat is removed, but the process isn’t exactly quick; it takes about two seconds for the button to form and an additional two seconds for it to dissolve again. This creates an issue for those who want to use a button regularly but not continuously.

Researchers were able to create three unique shapes: buttons, a slider, and a single-finger joystick button. The unique forms were used for various functions, from dialing a phone number without glancing at the display to scrolling through photos and controlling a simple game. Any number of forms could be created depending on the task at hand.

There’s still a long way to go before there is a consumer use for GelTouch, but researchers are continuing their work on the device in hopes of working out the kinks and making touchscreens capable of more than just taps and swipes.