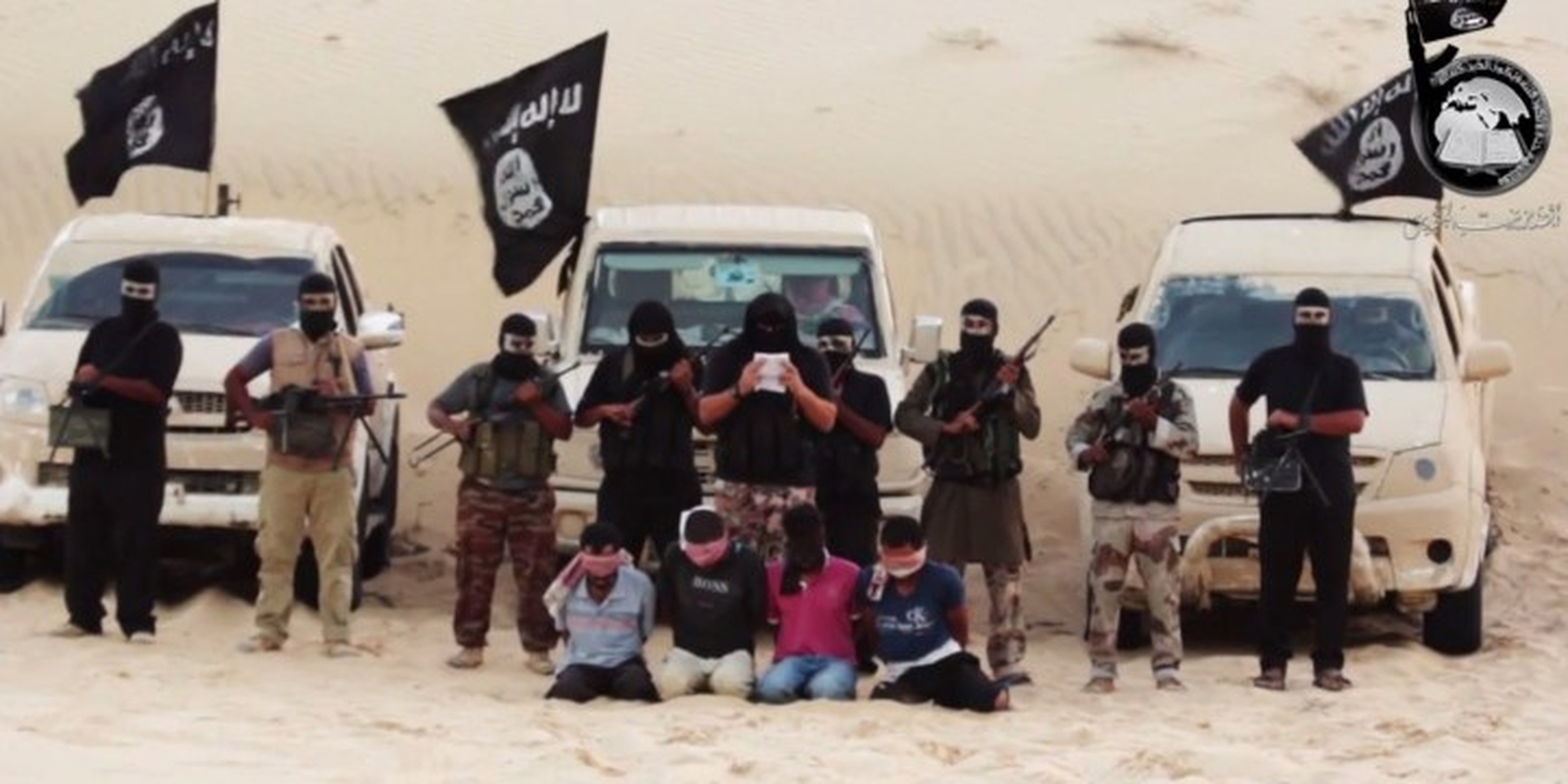 The council heard primarily from gay Middle Eastern men who fear persecution at the hands of ISIS.

“We are hated, and our suffering and death brings joy to people.”

Those horrifying words were spoken on Monday by a gay Iraqi man using the name Adnan. On Monday morning, the United Nations Security Council met to discuss LGBT persecution for the first time in its history. Adnan called and gave his testimony over the phone, speaking from an undisclosed location, where he lives in hiding and in fear.

The meeting was convened to discuss the terrorist group Islamic State (ISIS) and its attacks on LGBT people. Adnan’s testimony, shared with the Daily Dot after the meeting, was a harrowing account of running from one homophobic attack after another since 2013—at the hands of not only ISIS, but the Iraqi army, other Iraqi citizens, and even his own family.

“There were militiamen or security men who—if they found out someone was gay—would arrest him, rape him, torture him.”

“There were militiamen or security men who—if they found

out someone was gay—would arrest him, rape him, torture him. There were lots of murders supervised by the

Iraqi Army,” said Adnan in his testimony to the U.N. Security Council. “Videos came out of people being burned alive or stoned and you can see soldiers in them. I have

seen a video where some gay men had ropes put around their necks and they were dragged around the streets, and people were throwing stones at them. And when they were half-dead, they were set on fire. Some people

had their rectums glued up and were then left to die in the desert.”

Adnan said he had personally been attacked by groups of people on the street: Once, three people knocked him to the ground and shaved his head; another time, he was beaten and kicked “almost unconscious,” he said.

After ISIS took control while Adnan was in college, however, they began to visit his family’s home and threaten his life. He said his family turned against him; and because being gay in Iraq is punishable by death, and he couldn’t get help from police or the state, he fled.

“They [ISIS] hunt them down one by one,” said Adnan. “When they

capture people, they go through the person’s phone and contacts and Facebook friends. They are trying to

track down every gay man. And it’s like dominoes. If one goes, the others will be taken down too.”

According to Jessica Stern, executive director of the International Gay and Lesbian Human Rights Commission (IGLHRC), ISIS militants have killed at least 30 people for the perceived crime of sodomy. The violence particularly plagues Iraqi and Syrian LGBT people, said Stern, as ISIS has declared caliphates in the bordering countries.

“Murder is only the most extreme form of violence,” Stern told the council. “In addition to men perceived as gay, trans-identified people and lesbians are among those who have been raped and killed.”

The IGLHRC has been tracking reports of Islamic State-led homophobic murders on a timeline. Many of the reports that are released by ISIS include photos and videos of the deaths—often by stoning or being thrown off tall buildings.

Representatives to the council from the United States and Chile pushed for the meeting. As U.S. Ambassador Samantha Power told the New York Times on Friday, the U.S. has been trying to ensure that LGBT people are not left out of policies around persecution and conflict.

“We’re trying to get it into the DNA so that when you’re talking about minorities or vulnerable groups, you would always have LGBT people included,” Power told the Times.

On Monday, Power and other high-profile foreign policy reps and human rights organizations livetweeted the meeting using the hashtag #LGBTinUNSC.

In too many places, denying LGBT rights still seen as just. Laws criminalize LGBT persons, rather prosecuting those who violate their rights

.@UN session will look at ways to protect the rights and dignity of LGBT and other vulnerable civilians in conflict zones. #LGBTinUNSC

Stern @IGLHRC recommendations: governments must act with urgency for LGBT in need of relocation in Iraq and Syria

Can't stop thinking abt speaker from #LGBTinUNSC "I don't need gay marriage legalized in Syria, I just want to live with freedom & dignity"

The scope of the meeting was ostensibly limited to the direct mandate that Islamic State leadership has placed on eradicating gays from its territories. But many of the speakers discussed facing just as much of a threat from their own families as from ISIS.

“If I’d stayed, ISIS would have come for me and killed me the way they’ve killed others. If ISIS didn’t get me,

members of my family would have done it,” Adnan said.

Subhi Nahas, a Syrian refugee who fled after being attacked by Syrian soldiers and then watching as Al Qaeda and ISIS took over portions of the country and began executing gay men in public, also recalled being attacked by his own father.

“I have witnessed with my own eyes the annihilation of civility and humanity as I knew them,” said Nahas to the gathering of UN delegates. “For millions of Syrians both in and outside the country, time is running out.”

“Adnan was repeatedly attacked by gangs of thugs for being gay, once being beaten so severely that he could hardly walk.”

Nahas spoke to the council about running from the nonstop homophobic attacks—first to Lebanon, then Turkey, where he says he was again chased down by an ISIS zealot, and finally to the United States—where he now works as a refugee advocate for the Organization for Refuge, Asylum, and Migration (ORAM). He implored the security council to offer refuge to LGBT people all over the world who faced serious risks in their native nations.

Power, in a statement emailed to the Daily Dot just after Monday’s meeting, emphasized that ISIS (also known as ISIL) was just one arm of the threat against LGBT people in Iraq and Syria.

“While the targeting of LGBT individuals in the region appears to have worsened as ISIL’s power has grown, such violence and hatred existed well before the group’s dramatic rise, and that violence and hatred extends far beyond ISIL’s membership,” said Power. “Before Subhi Nahas was forced to flee his country because of death threats from Jabhat al Nusra, he was targeted for being gay by Syrian government soldiers. And before ISIL came to power, Adnan was repeatedly attacked by gangs of thugs for being gay, once being beaten so severely that he could hardly walk.”

According to IGLHRC communications director Suzanne Trimel, journalists were not allowed into the meeting (due to concerns over the anonymity of those testifying), but they were instead handed papers with prepared remarks. Some of the U.N. representatives were not happy about that.

"I would like the Sec Council to come out of the closet. Why isn't this an open meeting? Why are the journalists outside?" Rep/Argentina

The meeting comes amid the still-unfolding Ashley Madison data hack, which exposed some of the very LGBT people the U.N. aims to protect. It is unclear whether Ashley Madison was discussed during the meeting, though no reports indicate that it was.

The released data includes the billing addresses and other identifying information of LGBT users who signed up for sites like Mancrunch and Downlowing as well as Ashley Madison. Many of those users are presumed to have been closeted, and many are located in the eight countries across the Middle East and Africa, where homosexuality is punishable with the death penalty.

A quick look at downlow.ashleymadison.com, the hookup site for closeted gay and bisexual men (many of whom are married to women and “downlowing” on the side), revealed at least two men seeking men in Mauritania, 190 in Nigeria, 11 in Sudan, and more in Iran, Iraq, Yemen, Somalia, and Saudi Arabia. The Daily Dot also identified 13 users in Afghanistan, where it homosexuality is officially outlawed. 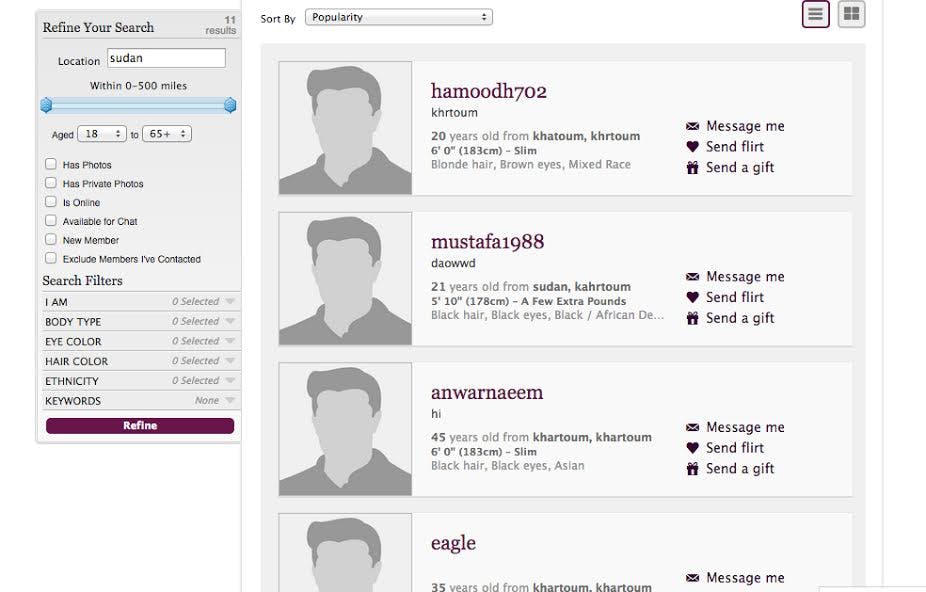 In eight of the countries listed above, homosexuality is punishable by death, leading many of these users to not include photos of themselves at all. In fact, an initial analysis of the leaked Ashley Madison data (which contains user information for dozens of websites, many of which are gay-oriented, owned by the Ashley Madison’s parent company, Avid Life Media) revealed several gay profiles on which users cited their location as U.S. or U.K. despite having credit card billing addresses in one of the anti-gay death penalty countries.

“No cultural values excuse refusing to investigate a killing, assault or death threat because the victim is gay.”

Cybersecurity analysts are working on a more comprehensive LGBT analysis of the Ashley Madison leak for the Daily Dot, but so far it’s clear that the hack may put some users in danger of being killed—either by the state or by groups like ISIS that could utilize the data to pinpoint the identities of gay, lesbian, bisexual, and transgender users included in the more than 35 million leaked accounts.

A request for comment on the Ashley Madison risk to LGBT people was sent via text to a U.N. Security Council media spokesperson but was not immediately responded to.

Whether or not a person’s LGBT identity is uncovered through a data breach or through the work of a terrorist cell, the risk of death or violence remains. As Power noted on Monday, too often those risks are shrugged off as “cultural differences.” She urged the Security Council to not fall into such a mode of thinking about LGBT human rights.

“No religious beliefs justify throwing individuals off of buildings or stoning them to death because of who they love. No cultural values excuse refusing to investigate a killing, assault or death threat because the victim is gay,” said Power. “These are not Western-imposed rights, or the North trying to force its values on the South. Yet in too many parts of the world, denying LGBT rights is still seen as moral and just. Laws are used to criminalize LGBT persons, rather than to prosecute the people who violate their rights. That must change.”