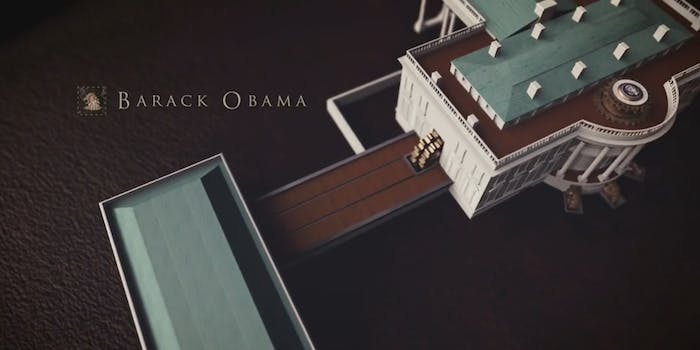 You don't need to be a political junkie to understand the parallels here.

Sometimes the best way to digest a complicated situation is through metaphor. What if the intricate world of Washington, D.C., politics could be explained through Game of Thrones?

That would be great, but it isn’t what you’re going to find here. Instead, the Washington Post‘s graphics team created a fun parody of the HBO series’ iconic opening credits, replacing the show’s cast with famous politicians like John Boehner and Nancy Pelosi, who work in the Capitol Building to the south, and Barack Obama, who works in the foreboding executive mansion slightly north and to the west.

Travel south, across a river, and you’ll find an obscure figure named Ashton Carter, who leads the largest employer in the world (and the largest government department) in a famous five-sided building.

The royalty-free music is a poor substitute for Ramin Djawadi’s epic Westerosi score, but it’ll do.

The video is well made, and it’s late enough on a Thursday that we’re all looking for something to distract us. In fact, we’re desperate enough that we’ll overlook the Post‘s ridiculous assertion that Daenerys Targaryen is the best character. Arya kidding me right now?