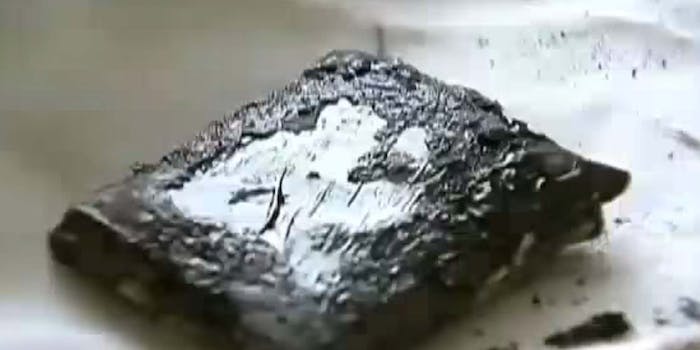 Note to self: Don't use third-party smartphone batteries.

A 13-year-old girl in north Texas was woken up in the middle of the night last week when her Samsung Galaxy S4 caught fire and burned her bed as she slept, the local Fox TV station reported.

“The whole phone melted,” her dad, Thomas Tolfree, told reporters. “The plastic, the glass, you can’t even really tell it was a phone.

Ariel Tolfree, who woke up to the burning smell and was unharmed, doesn’t have to wonder too much about why her phone combusted a few inches from her head.

The Galaxy S4 was running on an unauthorized third-party battery—the part that overheated, swelled, and started the fire—that her dad bought and installed in his daughter’s phone. That didn’t phase her father, however.

“We have a reasonable expectation that the products we buy are going to be safe,” he said.

Samsung pointed out that the phone’s users guide—which, surely, all of its users have read—specifically warns against “covering the device with bedding, your body, thick clothing…”