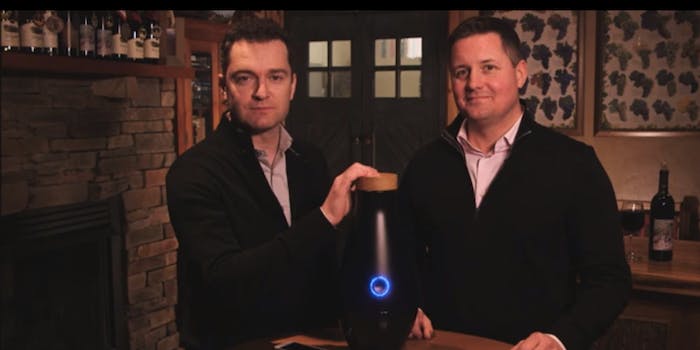 These guys made a gadget that actually turns water into wine

The next best thing to walking on water, or turning loaves of bread into fish.

While we probably wouldn’t want to bring most things from the Bible into the modern age—raise your hand if you think people who wear sheep’s wool on a Saturday should be stoned to death!—there are a few things that would be pretty cool if they existed in the 21st century.

Case in point: the Miracle Machine, a Soda Stream–esque kitchen gadget that, like Jesus, lets you turn standard tap water into wine. It sounds almost too good to be true.

Founded by oenophiles Philip James and Kevin Boyer, who co-own the custom wine-label-making start-up CustomVine, the Miracle Machine lets you control and monitor the wine-making process via a remote app on your smartphone. By mixing water with a “sachet of other ingredients,” such as grape concentrate and yeast, the machine turns water into wine over the course of just three days.

The machine is currently just in the fundraising and development process, and a Kickstarter will be launched in a week or two. But basically, here’s how it works: the water, concentrate and yeast sit in the machine’s “fermentation chamber” while you monitor the process on your smartphone. Then, the app directs you to add finishing powder, which contains oak and other flavors that will make the wine taste as if it has been aging for several months. Twenty-four hours later, you’ll receive a notification saying your wine is ready.

The machine will be pricy: James and Boyer say it’ll cost approximately $499, with each individual ingredient costing $1.99 each. But a finished bottle of wine will retail at $12, an affordable price for millennial dinner-party guests looking for a Merlot that’s not too expensive, but doesn’t taste like it was made out of fruit punch swimming in the bottom of a thrift-store sneaker.

The question remains, however: How good will this stuff actually taste? Though samples for the wine are currently unavailable, Boyer, a trained sommelier and former restaurant wine buyer, says in a promotional video that the end product is so good, “even I can’t tell the difference.” Our guess? Probably something like the urine of Satan after a hefty portion of asparagus.

H/T The Telegraph | Screengrab via The Miracle Machine/Vimeo