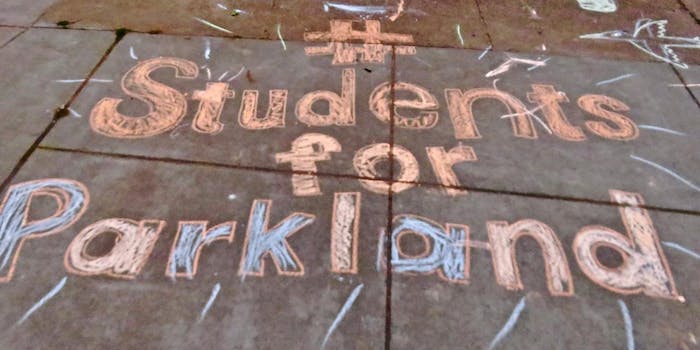 Guttenberg wants people to vote in his daughter's honor.

On this second anniversary of the Parkland shooting, loved ones and strangers alike took to social media to mourn, to remember, and to call for action. Many used hashtags referencing the shooting and urging gun control: #ParklandStrong, #MSDStrong, #EnoughIsEnough, and #GunControlNow were among the more popular.

Fred Guttenberg, whose daughter Jaime was among those killed, recalled sending his two children off to school that morning, unaware that only one would return.

“I was so busy rushing them out the door so that they would not be late that my final words were not ‘I love you,'” he wrote in a five-tweet thread.

“I sent my children to school where they were supposed to be safe. They were not. Jaime became a victim of gun violence. Two years ago. Hard to believe,” Guttenberg wrote.

“Every day is a new journey where I try to learn how to move forward and not move on. That is my reality.”

Continuing, Guttenberg urged people to vote in Jaime’s honor for candidates who will focus more of their efforts on preventing gun violence.

Other survivors and advocates also used the anniversary to demand gun control.

“If you don’t do anything else today, please register to vote,” Hogg tweeted. “We need new leaders who will protect our nation’s most precious resource, our children.”

Earlier this week, survivors and siblings Kyle and Mya Laman released a haunting video, (Take Action) Not Sides!, in which they recount the shooting. Following their video testimonials, the dance troupe Dancing 4 Change reenacts the shooting.

At the end of the video, the Laman children and their mother ask people across the political spectrum to stop focusing their efforts on arguing and instead take action.

The gun control advocacy group March for Our Lives also used the occasion to advocate gun control. Yesterday March for Our Lives, named for a student-led demonstration held in nearly 900 locations nationwide a month after the Parkland shooting, released a video of its members going to Senate Majority Leader Mitch McConnell‘s (R-Ky.) office to demand action on gun control measures that he has refused to call up for a vote.

Speaking on MSNBC’s Morning Joe today, he asked people to “join me as we work to defeat him because my family’s life is worth it, and so is yours.”