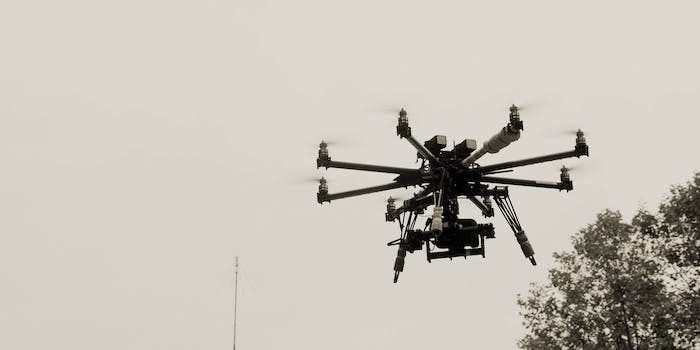 Photo via theirry ehrmann/Flickr (CC BY 2.0)

Amazon isn't the only one looking to the skies.

When Amazon first introduced the idea of using drones to deliver parcels in December of 2013, it was written off by many as a publicity stunt. But the company has forged ahead and in November 2014 the news broke that it plans to start trialing the program in Cambridge, England. And as it turns out, Amazon isn’t the only ones with their eye on drone deliveries.

The French postal service La Poste has just completed a successful round of testing for its own drone delivery service, Rude Baguette reports, with loads of up to 2 kilograms carried for over a kilometer. The ultimate goal is for the UAV’s (Unmaned Aerial Vehicles) to be able to travel up to 20 kilometers with 4 kilograms of weight.

The three-month program was actually born out of an April Fool’s joke in 2013, when La Poste insincerely announced it was partnering with parrot to carry out drone deliveries. It’s reminiscent of Gmail, which was also launched on April Fool’s Day in 2004—though unlike La Poste’s pilot project, Gmail was never a joke.

Logistics company DHL has also been testing drone delivery systems, this time in Germany, and UPS is even experimenting.

Drone testing has flourished under Europe’s relatively lax legislation regarding the UAV’s. As the Telegraph notes, Amazon and other interested parties have “come up against America’s stringent air traffic rules,” forcing them to look elsewhere—Europe.