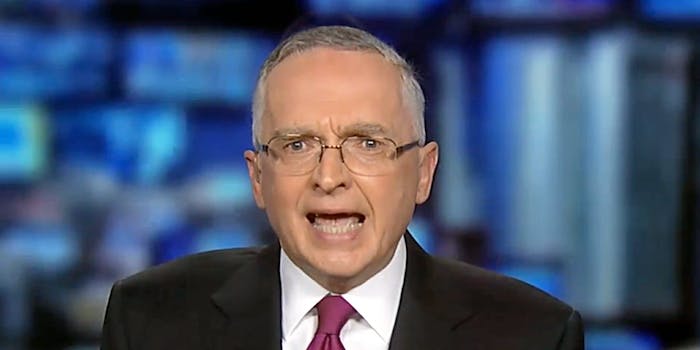 He has a NSFW way of describing Obama's ISIS strategy.

This isn’t a game. This is war—in the world of political punditry, at least.

Lt. Col. Ralph Peters, a regular guest on Fox News, delivered a swift kick to President Barack Obama‘s manhood on Monday morning after Fox Business​ host Stuart Varney asked him how he reacted while watching the president’s speech about terrorism on Sunday night.

“​Well, first of all, he keeps speaking about, ‘We can’t give in to our fears, don’t be afraid,’” Peters began. “Look, Mr. President, we’re not afraid. We’re angry! We’re pissed off! We’re furious! We want you to react. We want you to do something. You’re afraid.” (Emphasis his.)

Then came this: “I mean this guy is such a total pussy, it’s stunning.”

Peters went on to say that Obama has “done more harm to American police departments than he has done to the Islamic State.” He added that he believes Obama “cares more about thugs in Guantanamo or thugs in Ferguson, Missouri, than he does about law-abiding American citizens and their right to live in safety and peace.” (Again, emphasis his.)

Conservatives pounced on Obama following his rare Oval Office address, saying that his lack of a more robust plan of attack against ISIS proves he is failing to lead the U.S. to safety.

Peters, a long-time critic of Obama’s strategy against ISIS, retired from the U.S. Army in 1998, after more than 20 years of service, which included a high-ranking post in Army intelligence. He has previously written that he believes “there will be no peace” in our lifetime.

Following Peters’ denunciation of Obama’s courage, Fox said it would suspend both Peters and Dash for two weeks for allowing “inappropriate” language about the president of the United States, according to Fox News host Howard Kurtz.