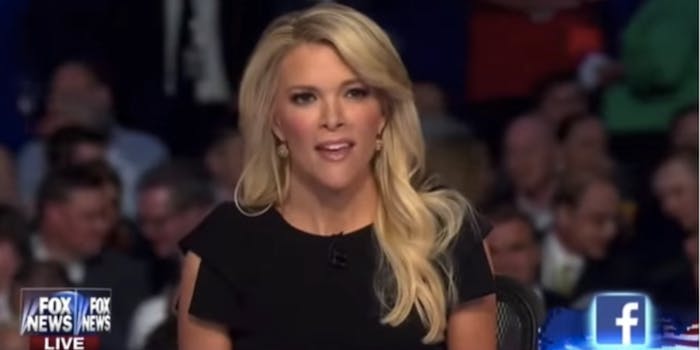 Even Fox News has had enough.

Following another string of predictable and desperate personal attacks on Kelly, Fox News released a devastating, no-holds-barred statement about Trump on Friday. It’s one of those things you have to read in its entirety.

Donald Trump’s vitriolic attacks against Megyn Kelly and his extreme, sick obsession with her is beneath the dignity of a presidential candidate who wants to occupy the highest office in the land. Megyn is an exemplary journalist and one of the leading anchors in America. We’re extremely proud of her phenomenal work and continue to fully support her throughout every day of Trump’s endless barrage of crude and sexist verbal assaults. As the mother of three young children, with a successful law career and the second highest rated show in cable news, it’s especially deplorable for her to be repeatedly abused just for doing her job.

Here’s what Trump said to prompt the statement from Fox News.

Can't watch Crazy Megyn anymore. Talks about me at 43% but never mentions that there are four people in race. With two people, big & over!

Crazy @megynkelly supposedly had lyin' Ted Cruz on her show last night. Ted is desperate and his lying is getting worse. Ted can't win!

Highly overrated & crazy @megynkelly is always complaining about Trump and yet she devotes her shows to me. Focus on others Megyn!

Everybody should boycott the @megynkelly show. Never worth watching. Always a hit on Trump! She is sick, & the most overrated person on tv.