A week ago, five Black Lives Matter protesters were shot outside a Minneapolis police station. On Monday, three of the four suspects were charged with felonies of second-degree riot while armed; and Lance Scarsella III, allegedly the one who shot all five black men, also was charged with five counts of assault.

As the St. Paul Pioneer Press writes, prosecutors insinuated that the four subjects—which include Daniel Macey, Joseph Backman, and Nathan Gustavsson—loved guns and that they targeted the protest for racist reasons.

According to the criminal complaint, Scarsella—whose phone included photos of him toting guns along with Confederate flags—called at least three people and told them he had shot five people during the protest. The complaint also states that Gustavsson texted his fellow defendants before attending the protest, saying, “If this shits (sic) going down on Monday we need to get out there[.] I could rile up so much shit up (sic)” and “I know how to make big news or get them to disperse.”

After the protest, though, they didn’t appear so tough. Via the criminal complaint, they all gathered in Scarsella’s home afterward and were “panicking about the shooting and trying to decide what to do.”

All four men are in custody, and apparently, they’ve admitted in jailhouse phone conversations that they were at the shooting. 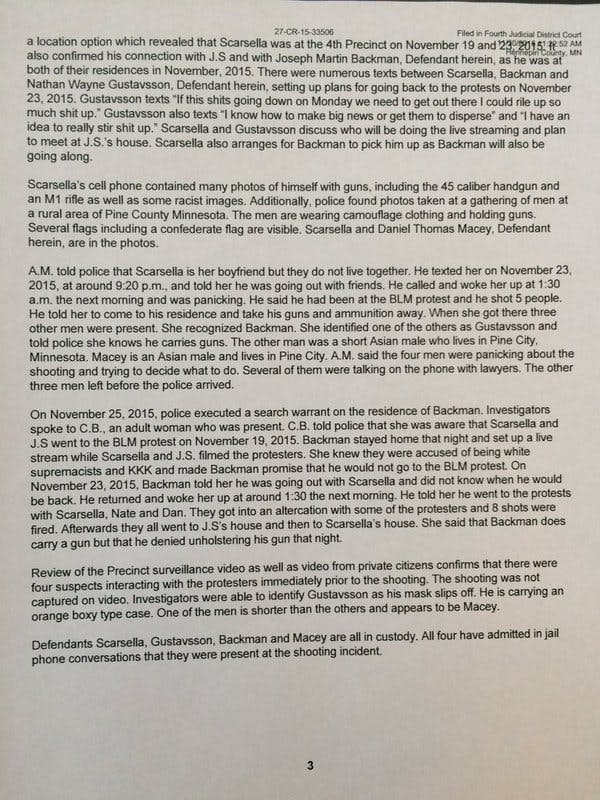 The Pioneer Press wrote that one of the people Scarsella allegedly called to confess his role in the shooting was an acquaintance who also happens to be a Mankato, Minnesota, police officer. According to the complaint, the officer told investigators that Scarsella “had very intense opinions, which the officer described as being a sovereign citizen and pro-Constitution. [The officer] knew that Scarsella had negative experiences with and opinions about African-Americans.”

County attorney Mike Freeman said, via the Minneapolis Star Tribune, that he didn’t have enough evidence to charge the men with attempted murder or a hate crime.

The four men have their first court appearances scheduled for Tuesday.

Meanwhile, there were more protests in Minneapolis on Monday.