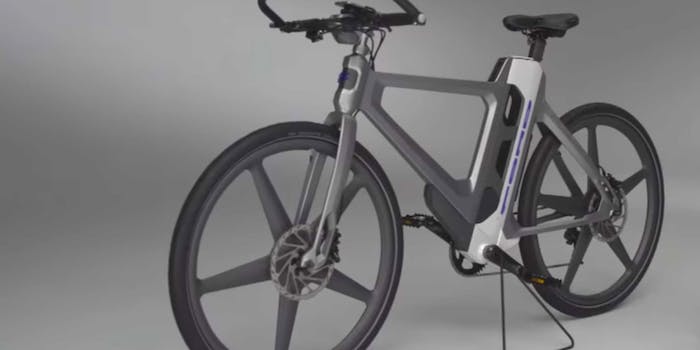 Ford is in the business of making vehicles to get you where you need to go, regardless of how many wheels it takes. The company recently started producing electric bikes and last night unveiled the latest in its line of pedal-powered rides, the MoDe: Flex.

The MoDe:Flex eBike: easily configured, stows inside any #Ford & gives you a boost up steep hills. #FordTrendshttps://t.co/032TisxRmQ

The third installment into its eBike family, Ford’s MoDe: Flex continues in the tradition of its predecessors with the inclusion of a motor and battery. It can also be broken down like the MoDe: Me and MoDe: Pro bikes before it, disassembling into two parts for easier storage.

But while those machines were targeted toward commuters, the Flex is for the bike enthusiast. It’s for those who prefer to navigate the city on two wheels instead of four. Thanks to the included motor, the person on the pedals won’t have to make all the effort when on the Flex—it can kick in and provide assistance when the going gets too tough.

The Flex also connects with smartphones, providing additional functionality. The most basic, expected features like hands-free navigation and directional assistance are available, as are weather and traffic reports, but things get more interesting with additional capabilities like “no sweat” mode. Activated from Ford’s app, the mode calculates the amount of effort required to get to a destination and compensates to make sure the rider never breaks a sweat.

Ford says the smartbike can even connect with the Apple Watch and provide warnings about upcoming potholes and other potential hazards by vibrating the handlebars, though it doesn’t explain where the information for this warning system comes from.

The MoDe: Flex is still a concept at this point, though Ford seems eager to show it off in action. If and when it does come to market, it could present a new option for commuters and drivers who would prefer to spend at least part of their trip on a banana seat instead of strapped into the driver’s seat.

H/T The Verge | Screengrab via Fordvideo1/YouTube