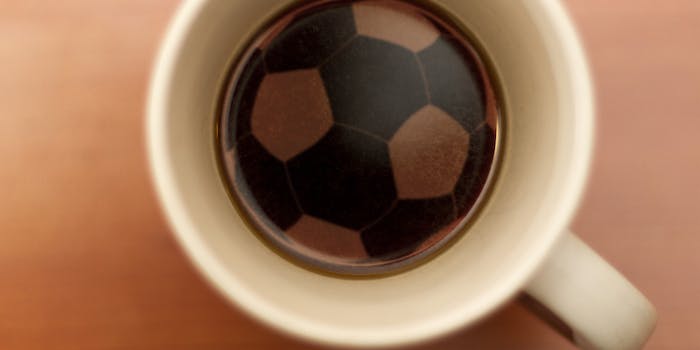 This mind-bending simulation just played 1,000 years of soccer in 58 days

Soccer can trace its roots back nearly 3,000 years to ancient Egypt. Trouble is, most of the sport’s history remains unrecorded.

Redditor Lorf_Yimzo decided back in March that he would give the sport the rich history it deserves. Using popular sports strategy game Football Manager 2015, the patient soccer fan put together 1,000 years of history for the English football pyramid. As 58 days passed by in real life, a full millennium of soccer ticked to a finish on his computer.

“I had seen other sims but they never went farther than 100 years or so, and I wanted mine to stand out,” Lorf_Yimzo told the Daily Dot. “I could do 500 years, but 1,000 years seems so much grander in my head.”

Dubbed the Millennial Sim, the huge undertaking that encompassed the years 2014 through 3015 is, obviously, entirely make-believe. But it’s a fascinating look at how an extraordinarily in-depth computer game sees the future playing out.

A bit of required background for those not in the know: The league structure for soccer in England is a tiered system. At the bottom are amateur leagues, at the top are the most elite professional clubs. Teams can move up by winning promotion. They replace the worst performers of the league above them, who are relegated down a rank.

In America, we have professional teams that openly tank—lose games on purpose—in order to acquire top youth players with a high draft pick. Try that in the Football League and you’re literally kicked out of the league until you do better. (Sorry Philadelphia 76ers, you’re in the D League now. Come back when you feel like trying.)

In order to quantify club success, Lorf_Yimzo developed his own point system to reward teams for various accomplishments. Taking home a title in the very top-tier Premier League (PL) nets the highest value, as does winning the prestigious FA Cup—an annual single-elimination tournament that invites everyone down to the amateur squads to compete. Winning at lower tiers rewards fewer points, and if you don’t place at all you get a goose egg.

The team that found the most success over the huge stretch of time was Sheffield United—a team currently positioned two rungs below the top tier of the sport in real life. The squad took home 167 first place finishes in the Premier League. It was matched in success only by Burnley F.C., another team not historically known for being a powerhouse.

Even in the world scene, there was some shifting of power. “Venezuela becoming a World Power such as the likes of Germany or Brazil was surprising,” Lorf_Yimzo said. The Venezuelan national team managed to capture 25 World Cup titles, the second most of any country. (Americans, you got three World Cups, and you probably didn’t even know about it until after the fact.)

Perhaps more interesting than who was successful was who declined to make room for the newcomers. According to Football Manager 2015, perennial contenders are in for some painful times over the next millennia.

“Chelsea fell and fell hard out the PL in the 2100s, and never [came] back to the PL until the 2900s, and only for a couple mediocre seasons,” Lorf_Yimzo said. He pointed out Chelsea was not alone in its 800 years of suffering. “Everton, Aston Villa, and Leicester had similar falls.”

As painful as that prediction is for fans of those teams, the sport is at its best when there is mobility. Seeing squads that generally underperform finally finding a way to string together some solid stretches and build a legacy makes things all the more interesting.

Lorf_Yimzo noted that while it’s hard to spot promotions and surprise success when viewing the sim results at a macro level, “There have also been occasions when a team [is] promoted to the PL, wins the PL, and [is] relegated all in the space of 10-12 years.”

Teams that hang around the amateur ranks like Forest Green Rovers F.C. managed to shoot their way up to the branch of soccer reserved for only the best players in the world, take home a title, and disappear back to the lower ranks to play a middling brand of soccer for another couple-hundred years. What that improbable run must have looked like exists somewhere in crunched numbers of Football Manager.

Over the course of the 2003-2004 season, Arsenal managed to go undefeated in league play, racking up 49 wins in a row and earning the nickname “the Invincibles.” In the year 3015, the streak still stood. Likewise, a 9-0 throttling delivered by Manchester United to Ipswich Town F.C. (a town that sounds like it was named in lorem ipsum) in 1995 remained as the largest margin of victory in a Premier League match.

Where new records were set happened most spectacularly in the loss column. “There have been some amazing records in Europe, such as Principat and Lincoln’s massive losing streaks,” Lorf_Yimzo said.

CE Principat dissolved in 2015, which might have been a solid, preemptive decision by the team’s ownership. Had they gazed into Football Manager’s crystal ball, they would have seen the squad set an incredible 267-game losing streak in the Europa League, an achievement in failure that took 565 years to accumulate.

That streak of despair was topped only by Lincoln, which went 740 games without winning a match in the Europa League.

What might be most interesting about the extended run of Football Manager isn’t what it does simulate but rather what it doesn’t. The numbers that the game produces tell the player everything they need to know about what happens on the pitch. But there’s plenty of implied information that isn’t explicitly supplied.

The two highest transfer fees—the price paid to purchase a player from another team—were set in 2044 and 2053. One could reasonably assume soccer to continue growing as a sport and the Premier League—being the top destination for talent—increasing salaries to acquire and retain the best players.

But the market never exceeds the bar set so early into the sim experiment. In fact, there’s somewhat of a dearth in big contacts until several centuries later. Did the economy tank? Was a salary cap implemented? Maybe there was some sort of major military conflict that took talent away from the leagues? Football Manager doesn’t say.

“Salaries didn’t inflate, and the talent pool never really changed except maybe the players got a little bit better,” Lorf_Yimzo explained, noting the game “can’t really predict things like that and if it tried, it wouldn’t work well at all.”

This isn’t an issue exclusive to Football Manager. In the NBA 2K franchise of basketball games, there is a throw-in moment at the end of each season where the team that wins the NBA Finals meets with the president of the United States. It happens in real life and the game prides itself on accurately portraying the basketball and NBA, so it’s a cute little throwaway scene.

Here’s the thing, though: every visit to the White House, the visiting team is greeted by Barack Obama. 2017, the year in which he leaves office, Obama’s there. 2026, a full three election cycles since he was last on the ballot, Obama’s taking pictures with the title holders. 2074? Obama, unaged, remains in power.

The implications range from hilarious (Obama bums around the White House all day, wearing khaki shorts and chilling in a hammock, sipping lemonade in the White House lawn) to slightly more reasonable (he’s the official sports ambassador) to a conservative’s nightmare (Obama has declared martial law, names himself commander-in-chief for life).

These are the things that make the divide between the simulation timeline and the real one clearer, but also make the virtual world far more interesting.

The game, as games tend to be, is also susceptible to problems that don’t exist in reality. Chalk them up to glitches in the matrix, but they make for fun observations.

As the simulation runs on, real players dissipate and are replaced by fake ones who keep the league going. Those players are randomly generated. “Names could be weird,” Lorf_Yimzo said. “A star striker for England was once called ‘Lee Lee’.”

He also said there was occasionally a high-value player sitting down in a mid-tier league, getting paid in the range of $40 million to dominate subpar competition and rosters that were constructed in whole for less than that single player’s salary.

Celtic F.C., a team that plays in a 60,000-capacity stadium, somehow tallied an average attendance of 600,000. Good luck finding a place to park.

Attendance issues went the other way, too; in the 2124 FA Cup, only 14 people showed up.

Lorf_Yimzo said, “Those were bugs, albeit strange ones,” but they might not be as strange as they seem. The Hillsborough disaster occurred because a significantly large number of people were admitted beyond the stadium’s capacity, and recently, a Champions League match was played in an entirely empty stadium—a punishment for racist behavior by CSKA Moscow’s fans.

These moments are glitches in the game, but features when building the story around it. Inexplicable things happen in sports all the time. If you were simulating a basketball game and a player scored 100 points, it would seem like something went wrong, but Wilt Chamberlain managed to do it. A player playing in 2,632 consecutive games would read like an accident in a game, but don’t tell Cal Ripken, Jr. that.

It’s the unexplained, unexpected, unbelievable moments, the ones that read like fiction, that becomes the stuff of legend.

In the community of Football Manager players, the tale of the Millennial Sim will be told through the generations.

Photo via Nicola/Flickr (CC BY 2.0) | Remix by Max Fleishman