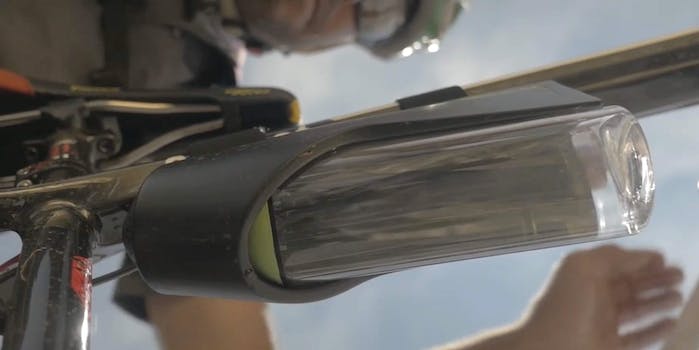 This water bottle turns air into drinkable water via condensation

Making water out of nothing.

Usually when you see something appear out of thin air, you attribute it to magic. In the case of this water bottle that turns condensation into drinking water, you can attribute it to science.

The Fontus, created by Austrian industrial designer Kristof Retezá, harvests water from the air and manifests it directly inside a water bottle. Using solar energy to create a condensation chamber, the device runs humid air through a series of elements that convert humidity in the air into drinking water. Filters in the system clean out potential contaminants like dirt and bugs.

Fontus is built to be a portable accessory with two separate models: the Airo, which can accompany pretty much anyone, and the cycling-specific Ryde. In ideal conditions, where the air is hot and humid, the bottle is able to produce about one half of a quart, or two cups, in an hour.

Beyond use for folks who adore the outdoors, Fontus holds potential to serve people in climates where clean water is scarce. The device needs to prove its concept more before it can be applied as any sort of solution for those larger problems, and that information is hopefully coming with tests and third-party white paper data.

The concept for the Fontus earned finalist status for the James Dyson award in 2014—an honor that celebrates university student invention.

A crowdfunding campaign to bring Fontus to market is expected in the near future, and the company’s creator has claimed the retail price will ideally be under $100. The company hopes to have the bottles on store shelves before the end of 2016.