Photo by DanCentury/Flickr (CC BY 2.0)

[email protected] uses the computing power in your pocket to simulate and research protein folding.

Most of us don’t use our smartphones to change the world. We use them to chat with friends, tweet, take photos, and respond to emails. But one organization wants to link our smartphones together in powerful distributed networks that can help research diseases like Alzheimer’s and cancer.

[email protected], a project based at Stanford University, simulates protein folding, molecular simulation, and drug design using idle computing power from thousands of volunteers who install the software on their computers. The protein-folding simulations aid in the study of—and search for cures for—diseases.

Now that smartphones carry nearly as much computing power as laptops, [email protected] is launching a mobile application to let smartphone users contribute to their research. Through a partnership with Sony, the team is releasing its first beta Android app with support for the Xperia Z series of phones, as well as the Xperia T3, T2 Ultra, M2 Aqua, and C3 devices. 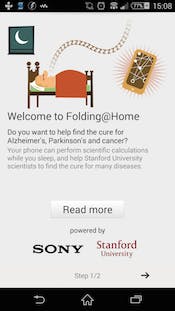 [email protected]’s open-source molecular simulation software is now optimized for mobile phones. Dr. Vijay Pande of Stanford University, the program’s director, said in a blog post that his team had completely rewritten the server’s backend to handle the needs of mobile devices.

Just what does [email protected] do that’s so important? It provides researchers with essential data on proteins.

Proteins are the building blocks of everything in our bodies. They are constantly folding to form billions of different shapes. Occasionally, though, a protein folds incorrectly, forming a shape that the body does not expect. These errors lead to diseases like cancer, AIDS, and Alzheimer’s.

Scientists still don’t know much about the protein-folding process, which the [email protected] team has been studying since 2000. They’ve used volunteers’ computing power to crunch the numbers behind the research; over 170,000 computers have produced over 44,000 teraflops of computing power.

With the increased computing power of Android smartphones, [email protected] plans to work on two main research initiatives: breast cancer and Alzheimer’s. The breast cancer project will study proteins that are targets for breast cancer drugs and explore how mutations in such proteins allow them to resist the drugs.

“By studying the nature of how these mutations change these key drug targets, we will be able to both advance our basic biophysical understanding of these key proteins as well as build a tool to be used for patient specific breast cancer treatment,” Dr. Pande wrote. “By sequencing the tumor and seeing what mutations are present, our tool seeks to recommend the best drug for a specific patient.”

The second project will focus on misfolding disease, in which improperly folded proteins lead to diseases like Alzheimer’s and Parkinson’s.

For now, the [email protected] mobile application is still in beta and is available only on Sony devices, but an app for all devices running Android 4.4 and above will be released soon. In the meantime, you can turn your laptop into a problem-solving, research-assisting machine right now by downloading the [email protected] computer program.

Photo by DanCentury/Flickr (CC BY 2.0)