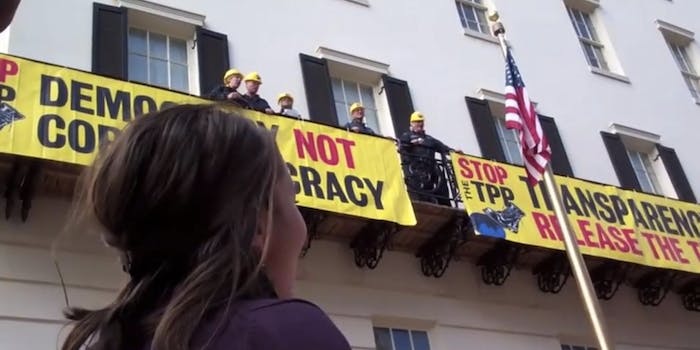 Flush the TPP doesn't mix their metaphors when it comes to the Internet-strangling Trans-Pacific Parternship.

It’s hard to get people to pay attention to the Trans-Pacific Partnership, a multinational trade agreement that could be disastrous for the Internet.

So how about a poop joke, then climbing on to a major federal building?

That might be what it takes, since details about the TPP are inherently pretty hard to come by. Trade agreements are necessarily negotiated largely in secret—even though corporate lobbyists, unlike you and me, are given some access. Internet activists are particularly concerned because a previously leaked draft of its intellectual property chapter pushed for harsh copyright enforcement that would be standardized across member countries—12 of them at last count, including the U.S.

So on Monday, eight activists under the banner Flush The TPP donned hard hats and climbed onto the balcony of the Winder Building, home of the U.S. Trade Representative, which represents the U.S. in the TPP. From there, they unfurled banners reading “Transparency: Release the Text” and “Democracy Not Corporatocracy.”

The group is particularly concerned with the notion that the White House might Fast Track the TPP, meaning that once it’s finalized as a draft between member nations, it’ll simply go before Congress as a yes or no vote—meaning elected representatives can’t take issue with specific details in the text.

If Fast Track does happen, it greatly increases the chance that the TPP will pass in its entirety. The EFF‘s Maira Sutton told the Daily Dot that it’s unlikely for many in Congress to vote against a Fast-Tracked TPP, calling it “a very politically risky move that many reps may not take, especially if they get funding by the same interests that have been lobbying for provisions in the TPP.”

Flush the TPP encourages concerned citizens to call their representatives. They don’t encourage you to make poop jokes while on the phone with them.