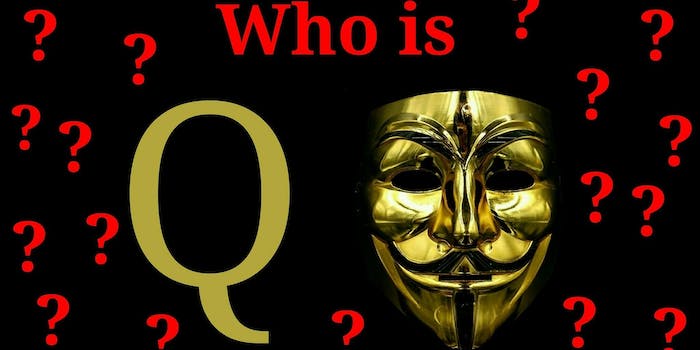 Q makes an appearance in Florida.

Matthew Lusk, the Republican congressional candidate in Florida’s 5th District, has several odd and conflicting viewpoints: According to his website, he’s anti-choice, believes in reparations for descendants of slaves and Native Americans, wants to get rid of the IRS, the NSA, and the CIA, and legalize prostitution. But perhaps the oddest part of his campaign website is his belief in QAnon.

“I belong to no secret societies or clubs, Q is one of my issues because it’s definitely a leak from high places,” Lusk told the Florida Politics blog on Monday. “I follow Q, but I don’t know who or what Q is.”

QAnon is the conspiracy theory that took root in late 2017 claiming, among other things, that Hillary Clinton, Barack Obama, and several other prominent Democrats, are part of a shadowy “Deep State” that preys on children.

Lusk doesn’t go far into his Q affinity on his campaign website—the post labeled “Q” in his “On the Issues” section simply reads, “Who is Q.” But he told the Daily Beast that Q has a “very articulate screening of past events, a very articulate screening of present conditions, and a somewhat prophetic divination of where the political and geopolitical ball will be bouncing next.”

Lusk told the Daily Beast that he wouldn’t necessarily use Q to guide his political decisions unless Q revealed “criminal leaks or seditious activity” that “warranted an investigation.”

Lusk’s website does not include many biographical details about him, and little is know about him outside of the scant information on his website. But he told the Florida Politics blog that he’s anticipating challenges.

“I can’t imagine the globalist deep-state not putting up a challenger in the primary, I can’t wait to grind them into sawdust. The primary will be a bigger swordfight but I don’t see a problem overcoming either,” he said. But he hopes to bring “the sword of truth to D.C. to decapitate the swamp creatures.”

Lusk is only the latest political figure to endorse Q, as the Daily Beast points out. A South Carolina state representative endorsed the theory on social media and a California city council member brought up QAnon during an official meeting late last year.