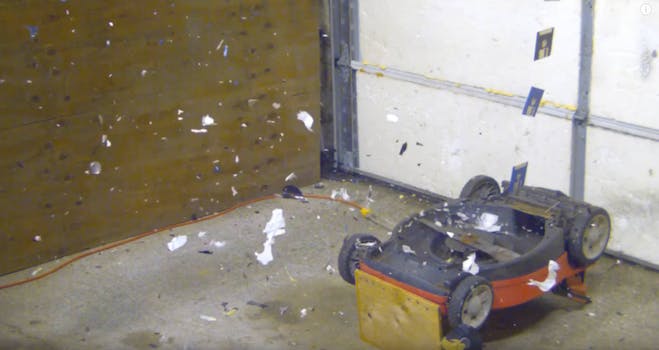 Screengrab via Will it Mow?/YouTube

‘Will it mow?’ sparks a new genre of YouTube destruction

That's one way to make sure no one sees your personal data.

We have a pretty good idea at this point if something will saber. But “will it mow?”

That’s the question posed by one of the strangest YouTube series we’ve seen in some time. Utilizing an upside-down lawnmower and a couple of slow-motion cameras, some dude has been destroying random objects in his garage for the last eight months. He’s butchered a wristwatch, a point-and-shoot camera, and a laptop CD drive, and his latest experiment is a thing of strange beauty.

“I have a lot of private data on these old [floppy] discs,” he says at the start of the video. “I better get rid of them to make sure no one sees what I do on my computer.”

There are easier ways to erase your data, sure, but none of them probably feel this gratifying. The lawnmower turns the floppy discs into confetti, and watching it happens makes you want to live out your own Office Space daydreams.

It’s no wonder this guy wanted to destroy his data, though. Nobody wants to see what’s really on this disc:

Screengrab via Will it Mow?