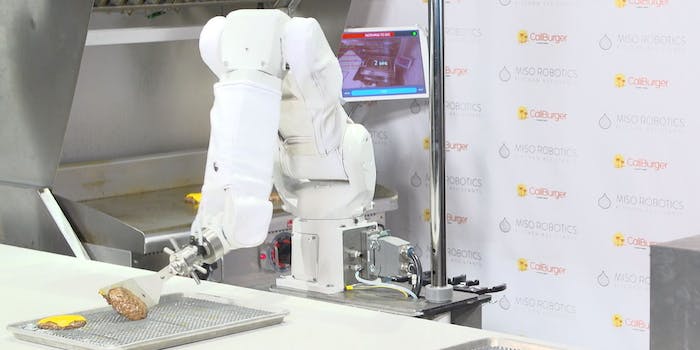 Flippy may have messed up the human burger makers.

A burger-flipping robot named Flippy the Robot has been fired from his post at a California burger joint after only one day on the job.

Flippy, made by Miso Robotics, is billed as the “world’s first autonomous robotic kitchen assistant.” Like most artificially intelligent entities, it’s supposed to learn from its surroundings to improve over time. Basically an industrial robot arm with a spatula attached, Flippy is designed to cook burger patties perfectly and consistently, at an impressive rate of 150 patties per hour.

Flippy the Robot was recently hired by Pasadena Caliburger and brought on board earlier this month. Customers excited to see the robot and try one of its burgers firsthand overwhelmed Flippy, according to the Washington Post. The robot couldn’t keep up with demand—and possibly interrupted human staffers’ established workflows. Management has decided to retrain Flippy the Robot so that restaurant staff can more efficiently work alongside it.

“Mostly it’s the timing,” Anthony Lomelino, the Chief Technology Officer for Cali Group told USA Today. “When you’re in the back, working with people, you talk to each other. With Flippy, you kind of need to work around his schedule. Choreographing the movements of what you do, when and how you do it.”

Caliburger has had trouble with kitchen employee retention and hopes that augmenting its staff with robots will help alleviate those issues.

While Flippy the Robot was put out of commission after only a very short time on the job, it will eventually rejoin the ranks of his burger-making colleagues. Other burger chains are also hoping to get in on the trend. With labor costs rising, Jack in the Box’s CEO has said that it may add robots to the mix—things like kiosks for entering your order, or Flippy-style burger flippers.  Carl’s Jr., Hardees, Wendy’s, and McDonald’s are also toying with the idea of some sort of automation to help improve the fast food experience (and mitigate issues with unreliable workers).

As we’ve seen with Flippy though, there are still unforeseen logistics that need to be handled before robots become a mainstay in the restaurant world. Fast-food workers shouldn’t worry about robots stealing their jobs—just quite yet.