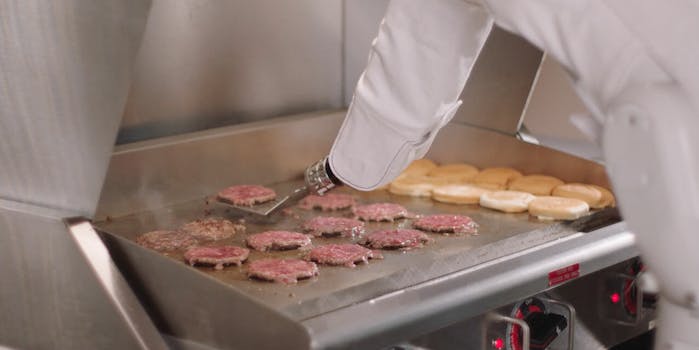 Flippy, the hamburger-flipping robot, has arrived

Bad news, grill cooks. A robot could be on its way to take your job.

A robot named Flippy is now cooking hamburgers at fast food chain restaurant CaliBurger in Pasadena, California, KTLA reported Monday. You can watch the robot’s stunning burger-flipping prowess in the video below.

The company that runs CaliBurger was interested in Flippy because unlike a fallible human, it will cook identical burgers every time.

“The key to success in the restaurant industry is consistency,” Cali Group CEO John Miller said. “So anytime you go to a CaliBurger anywhere, you know that the patty will be cooked exactly the same.”

California developer Miso Robotics designed the $60,000 machine to use thermal imaging, 3D, and camera technologies to know when to flip burgers and when to pop them off the grill.

But fast food workers don’t have too much to fear—yet. David Zito, co-founder and chief executive officer of Miso Robotics, insists they’re not developing robots with the intention of replacing real people’s jobs.

“The kitchen of the future will always have people in it, but we see that kitchen as having people and robots,” Zito said.

Artificial intelligence will help Flippy get better at flipping burgers the more time it spends at the grill, but the machine still doesn’t know how to add cheese and toppings. For now, a human co-worker handles that.