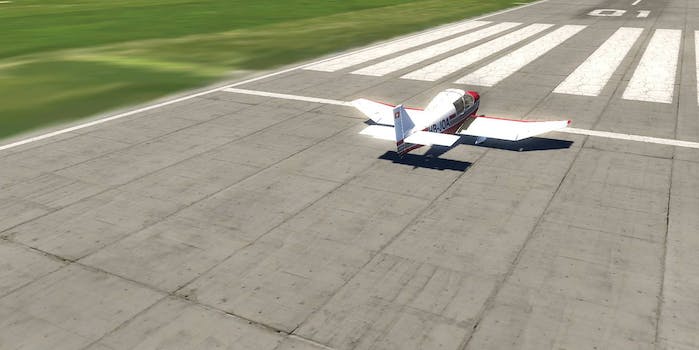 If you're a Muslim who plays flight simulator games, you may get on a terrorist watch list.

Wiley Gill, a custodian at California State University, has been branded a “suspicious male in possession of flight simulator game” by the the federal government’s Suspicious Activity Reporting Program. Yes, the man is suspected of engaging in terrorist activity for owning a video game.

This is all due to post-9/11 paranoia policy, the National Suspicious Activity Reporting Initiative, which gathers evidence on suspicious individuals, assembles a database, and gives law enforcement access. Information can be stored for 30 years.

Right now Gill, along with four other men, is challenging the Department of Justice, claiming that what is deemed “suspicious activity” is far too broad and that “innocent Americans are ‘wrongly branded as potential terrorists.” For example: “Coupled with the fact [Gill] is unemployed (he was unemployed when thrown into the SAR database), appears to shun law enforcement contact, has potential access to flight simulators via the Internet which he tried to minimize is worthy of note.”

Flight simulator games on the Google Play store have received millions of downloads.

To underscore this broadness, consider James Prigoff, an internationally renowned photographer who was thrown in the SAR for photographing a painted natural gas storage tanker. Also look at Tariq Razaq, a man who was going to the county employment resource center, which is located inside a train depot. Maybe it was his mother, dawned in a white burka, that tipped law enforcement.

Aaron Conklin, a graphic design student and amateur photographer, was threatened that he would be put on an “NSA watchlist” for taking photos of industrial architecture. Then there’s Khaled Ibrahim, who works for a computer network consulting and service company. He had to buy a bunch of computers from Best Buy because he was the purchasing agent for his company. That was enough to tip off law enforcement.

Of the five men going forward with Gill v. DOJ, four, including Gill, are Muslim. Something seems a little fishy.

Federal judge Richard Seeborg thinks so as well, and has issued an order allowing the case to move forward—denying the government’s motion to dismiss. The feds feel that throwing these men on an SAR doesn’t really harm them legally. But that overlooks the time law enforcement entered Gill’s home responding to an apparent domestic violence incident, even though Gill was home alone.

Lawsuit supporters maintain that the SAR is giving law enforcement a bullying platform to encroach on an individual’s constitutional rights. If Gill wins, it could put an end to the NSI’s SAR program.