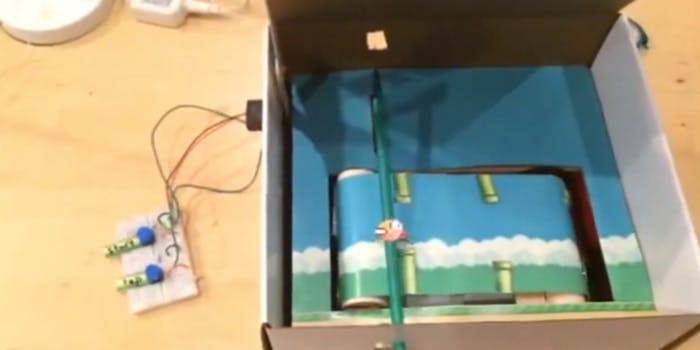 And now, someone has broken the fourth wall, and created a real-life version of the game.

Developer Fawn Qiu’s iteration comes in a refurbished camera box, and the action is controlled by two servo motors, magnets, a reed switch, and Arduino software. The box closes when you hear the game over sound. So even in real life, the game is frustrating. On her YouTube page, Qiu, who’s also the founder of the MakeAnything project, says the game was inspired by the Mario in a Box game.

So now that we know what’s in the box, what could possibly be the next phase of the Flappy Bird saga? There’s already a Miley Cyrus hack of the game. A real-life Flappy Bird sighting? A Flappy Bird musical? When you really think about it, aren’t we all Flappy Birds, trying to naivgate the series of infinite pipes called life?