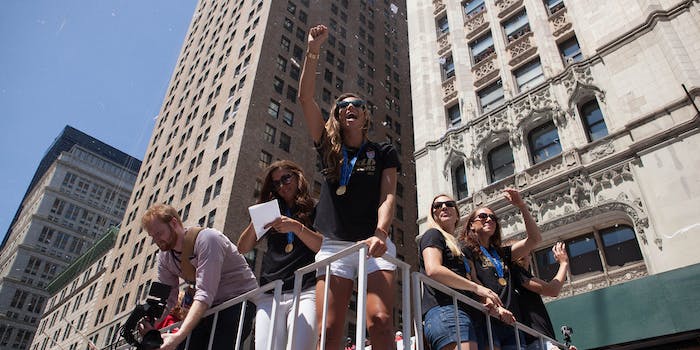 The 2015 Women's World Cup prize money was one-fourth the payout to the losing men's team.

Nearly everyone in the U.S. watched the 2015 Women’s World Cup. With 26.7 million viewers, it was the most-watched soccer game in American history.

On Tuesday, 28 members of Congress, led by Reps. Jackie Speier (D-Calif.) and Linda Sánchez (D-Calif), sent a letter to international football association FIFA demanding that the gender-based pay gap in soccer be closed.

“FIFA has underinvested in women’s sports out of motives ranging from apathy to discrimination.”

“There is ample evidence that FIFA has underinvested in women’s sports out of motives ranging from apathy to discrimination,” wrote Speier in the letter.

“FIFA only puts about 15 percent of global development money into women’s and girl’s programs,” Speier continued. “It has also provided women players with unequal facilities such as astroturf playing fields instead of grass ones, which prompted a discrimination lawsuit that FIFA avoided out of sheer delay.”

The 2015 Women’s World Cup was the first one ever played on astroturf instead of real grass—despite a lawsuit filed in 2014 by Wambach and about 60 of the world’s other top women’s soccer players to try to get the turf replaced in all of the stadiums. When the stadium line up was announced in 2013, players immediately began to protest the turf issue.

U.S. Women’s National Team (USWNT) star forward Abby Wambach, who currently holds the world record for most international goals of all time (male or female), said in interviews that playing a World Cup on astroturf was a “nightmare.”

Playing a major professional soccer tournament on astroturf is simply not something that happens for men. As Wambach said in a May ESPN interview, “no world-class footballer on the planet would prefer to play on artificial grass.” And there’s good reason for that—as the women’s players have shown over and over, astroturf causes “turf burn,” or unnecessary injuries when a player slips or falls on the field. Wambach said the ball also responds differently on the sharp plastic blades than it would on the grass that teams practice on, making the game more unpredictable.

This is why soccer should be played on grass! pic.twitter.com/fsNGi27oRY

Oddly, when the Scotts Lawn Care company offered to replace astroturf with three million dollars worth of real grass—free of charge—in all of the Women’s World Cup stadiums, FIFA and the Canadian association declined.

But inferior playing fields weren’t even the most discriminatory issue surrounding the 2015 Women’s World Cup.

For winning the most-watched soccer game in American history, the USWNT was paid a total of $2 million. Not bad, until you learn that the team that loses in the first elimination round of the men’s version is paid $8 million.

That’s right—the most-watched winning team with the highest-scoring player in the world was paid only one-fourth of what male losers are offered to walk away.

Yes, the U.S. team won and was featured on the cover of Sports Illustrated. Yes, they were awarded team of the year at the 2015 ESPYs ceremony. Yes, they became the first women’s professional sports team to be honored with a ticker-tape parade down Broadway in New York.

“Let the women play in more feminine clothes like they do in volleyball,” said Blatter in a 2004 remark about how to make the game more popular. “They could, for example, have tighter shorts. Female players are pretty, if you excuse me for saying so, and they already have some different rules to men—such as playing with a lighter ball. That decision was taken to create a more female aesthetic, so why not do it in fashion?”

The congressional letter suggested that FIFA “review its policies to ensure it is no longer part of the problem.” It also used the Wimbledon tennis match as an example of a major sporting event that, in 2007, adjusted its pay discrepancies so that female players would be paid equal prize money.

Although FIFA confirmed to Speier’s office that it received the letter on Tuesday, the organization has yet to respond.