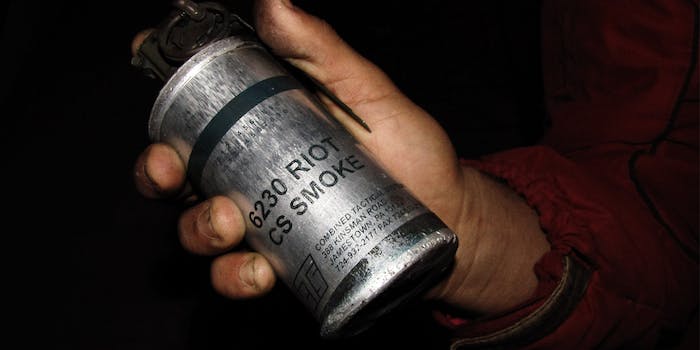 Does this risk further escalating tensions?

The streets of Ferguson, Mo. descended into madness on Monday night after a St. Louis grand jury decided not to indict police officer Darren Wilson for the fatal shooting of unarmed black teen Michael Brown in August 2014.

Community tensions had been at boiling point for months, with numerous—and at time violent—protests, but the decision not to press charges against Wilson sparked riots of a ferocity not seen since the immediate aftermath of the shooting.

More than a dozen buildings were torched, 29 people have been arrested, and hundreds of shots have been fired (though police say they have not used lethal weaponry). Protesters’ grievances focused on the perceived unaccountability and growing militarisation of law enforcement—and photos taken Monday of an unidentified “Tank Man” blocking the path of armoured police vehicles are already becoming emblematic of these concerns.

But perhaps the starkest picture of the chaos and violence on the ground comes from Fusion-affiliated filmmaker Tim Pool. The journalist captured footage of protesters trying to bring an apparently unconscious woman to safety; after confusion, heavily-armored police officers throw a tear gas canister into the crowd, begin firing rubber bullets, and reportedly deploy flashbangs.