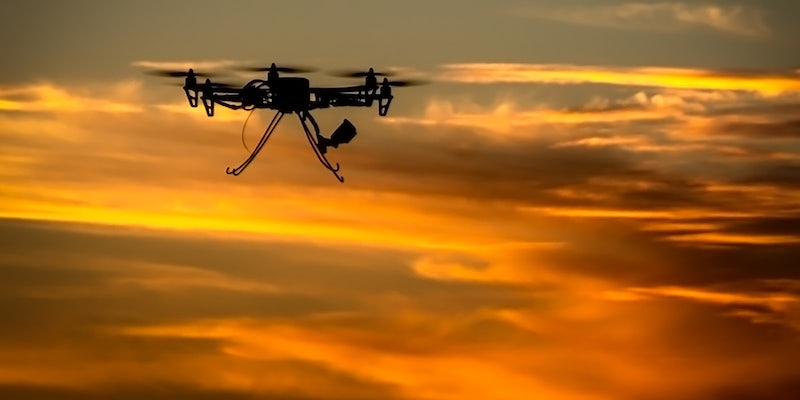 As the protests in Ferguson, Mo., following the shooting death of an unarmed black teenager by a local police officer, stretch on past their first week, people around the world are hungrily consuming every morsel of information, every shocking image, and every glimpse of video coming out of the St. Louis suburb.

While the press has swarmed into Ferguson to cover the ongoing events, two journalists even getting detained by police in the process, one perspective has largely gone missing: the view from above.

On Tuesday, the Federal Aviation Administration (FAA) issued an order creating a no-fly zone over Ferguson, after reports of shots being fired at a police helicopter. According the official notice, the restrictions were put in place “to provide a safe environment for law enforcement activities,” but it also stopped news helicopters from providing overhead views of what’s been going on.

However, a news crew from Ruptly, a spinoff of Russia’s state-controlled, U.S.-focused news agency RT, was able to get a video-equipped drone into the air earlier this week. The footage shows burned-out buildings rendered all but unusable from damage sustained during the protests.

Ruptly has disabled embedding on the 90-second video, but it can be viewed in its entirety here.

A representatives from the FAA told the Daily Dot that thet no-fly zone currently in place over Ferguson does apply to drone.

Additinally, the FAA has prohibited the use of drones for commercial purposes since 2007. Being a commercial operation, Ruptly’s flying a drone for journalistic purposes appears to violate that order as well.

The FAA’s rules on drones have been successfully challenged multiple times in court, including one case involving a drone video shot over the  University of Virginia campus. These sweeping victories for drone pilots led some observers to speculate that all of the agency’s rules on drones may have effectively been invalidated—although the FAA does not think so.

While drones seem like an ideal solution to the situation in Ferguson, allowing news organizations to shoot aerial footage without need to put human beings in the types of aircraft protesters in the area have reportedly fired on, drones still have the potential to do serious damage to people on the ground if they spiral out of control and crash into a crowd. Being a safety agency first and foremost, the FAA’s primary concern in the situation in Ferguson is doing whatever it can to minimize the chances of anyone getting hurt.

Yet, many in the news media have argued that restrictions on drone use are infringements on Americans’ First Amendment rights. An amicus brief submitted by a coalition of more than a dozen news companies—such as the Washington Post and the Associated Press—in support of the drone pilot being targeted in the University of Virginia case, argued:

The federal government has deprived its citizens and a free and independent news media of the opportunity to participate in the rulemaking process required under U.S. law when the government seeks to regulate, restrict, or curtail otherwise proper lawful activity. The federal government, through the FAA and with the NTSB’s encouragement, should move forward with the development of polices that protect, rather than hinder, freedom of speech and of the press.