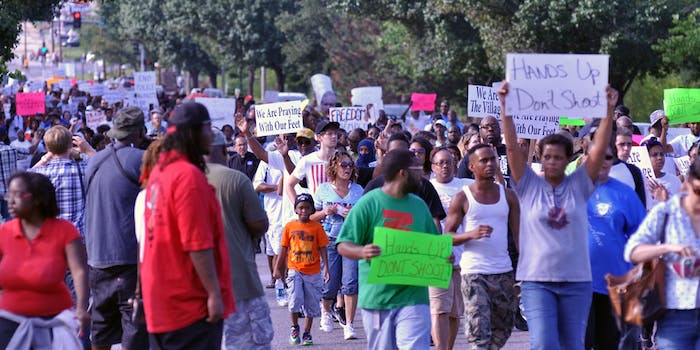 It turns out that you actually can peacefully assemble in America.

Protestors and journalists had their constitutional rights violated in the wake of the shooting of Michael Brown in Ferguson, Mo., when police didn’t allow them to stand still or even walk slowly during protests, a federal judge ruled yesterday while banning cops from using the tactic in a preliminary injunction.

The “practice of requiring peaceful demonstrators and others to walk, rather than stand still, violates the Constitution,” Chief U.S. District Judge Catherine D. Perry wrote.

Evidence from witnesses showed that police “told many people who were either peacefully assembling or simply standing on their own that they would be arrested if they did not keep moving,” Perry wrote. Some cops adopted a rule that said standing still for more than five seconds was grounds for arrest while others banned “walking too slowly” or said people “could not walk back and forth in a small area.”

The tactic was adopted on Aug. 18 by the Highway Patrol, County Police, and St. Louis City Police in an attempt to discourage assembly as protests grew.

On the contrary, Perry said, people who want to assemble following “Michael Brown’s tragic death have a constitutional right to do so.”

Although initially defended by Highway Patrol Capt. Ron Johnson as “allowing you to protest,” St. Louis County Police Chief Jon Belmar later said the rule’s wide use even during daylight hours was the result of a miscommunication between police leadership.

A spokesman for the St. Louis County Police Department told the New York Times that the ruling will not affect the way protests are handled because “we were not going to use it going forward.”

“This injunction prevents only the enforcement of an ad hoc rule developed for the Ferguson protests that directed police officers, if they felt like it, to order peaceful, law-abiding protesters to keep moving rather than standing still,” Perry concluded.