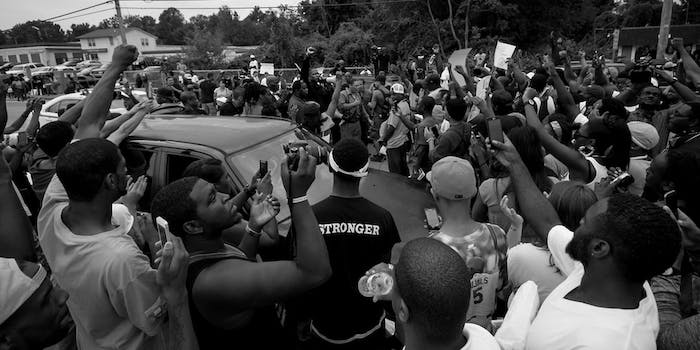 “What about Mike Brown?”

It was one of the first questions posed at last night’s tense city council meeting in Ferguson, Mo.—the first meeting since protests began a month ago over the death of Mike Brown.

Officer Darren Wilson, who shot Brown six times, is still on paid administrative leave according to the city council. Not only is Wilson on paid leave, but the city is also paying for a security detail for Wilson, who is in hiding as he awaits a grand jury hearing on whether to file charges in the case. But with the grand jury reportedly delayed until mid-October, tensions in Ferguson are as high as they were a month ago.

One #Ferguson citizen, arrested during protest, says “the ironic thing is, I spent more time in jail than Darrin Wison.” Cheers erupt.

Crowd just said the pledge of allegiance. NOT US. After, the crowd repeated the “ALL” in ‘liberty & justice for all’. #FergusonCCM

Interesting moment at Ferguson City Council mtng. Following pledge of allegiance, a rumbling chorus of “Justice For All” rose from audience

“We’re fired up and can’t take it no more!” – chants at first council meeting since Mike Brown’s shooting.

Once the meeting began, the council proceeded with routine business instead of immediately discussing the Darren Wilson case. This proved difficult when the council and Mayor James Knowles III ignored many of the audience’s pressing questions about the case.

The bizarre image of a city council not answering questions ranks up there with riot cops pointing assault rifles at people with hands up.

Crowd is already getting PISSED because James Knowles said comments will not be answered. #FergusonCCM

When asked again by one citizen why #Ferguson council won’t respond to comments, Mayor says they’ll have town halls for conversations. Boos.

Although the council called for “respect” from the audience, the agenda remained tense as the council continued to ignore questions.

People flipped out when the Mayor said that he wants people to “respect” the investigative process. Flipped out. #Ferguson

STL Alderwoman Tyus is pressing about definition of excessive force. STL Chief does not answer. #Ferguson

When the mayor attempted to state that Ferguson police had no jurisdiction to arrest Wilson, the crowd erupted with anger:

When asked again by one citizen why #Ferguson council won’t respond to comments, Mayor says they’ll have town halls for conversations. Boos.

Among the questions raised at the council was the issue of the newly-announced citizen’s review board. Though the intent of the review board is to allow citizens a means of overseeing the police force, concerns abound over the lack of transparency around the formation of the board, which may actually be illegal.

Resident:”you presented a bill for a civilian review board without once consulting the residents so how is it passed?” #FergusonCCM

Lynch showed me draft of the citizens review board and said it was weak, primarily cause it had no subpoena power: pic.twitter.com/EF5C65RFwG

Supporters of the Ferguson protest movement who followed the meeting online were quick to point out that one of the councilwomen is former police officer Kim Tihen. She was previously sued for beating up a civilian, who was then arrested for bleeding on officers’ shirts.

This is councilwoman, former cop, who beat a man and then ferguson charged him for getting blood on her uniform. pic.twitter.com/YFsrTpLqc4

Woman to #Ferguson City Council: “You don’t care that my constitutional rights were violated?” #FergusonCCM pic.twitter.com/NHPsWGPlpg

Others pointed out how disparate the council, which consists of five white members and one Latino member, was from the audience, many of whom shared stories of their own arrests during the Ferguson protests.

Cops giggling in the back as this woman talks of being shot at during protests by cops without name tags. #FergusonCCM

“This is white supremacy at this table. They have the privilege to seperate themselves from our reality.” #FergusonCCM speaker

A member of the community, Twitter user @TrillaryKlinton, was prominently featured on the St. Louis Post-Dispatch for “rushing the stage” after the Mayor refused to answer the question about whether Wilson was still on paid leave.

Woman rushes stage when #Ferguson mayor wouldn’t answer why officer had not been arrested. #MikeBrown pic.twitter.com/BK3Qzyz5zo

A video which captured the moment shows the woman striding up to the stage and shouting along with a group of other people before being ushered back to her seat on the front row. After the article, she spoke out about what she felt was a mischaracterization:

@lmaibes @kodacohen that is me. And I did not rush the stage. I was sitting in the front row in front of the stage. Great angle 😒

The angle of the picture makes it seem as if I was being tamed. No,I stood up calmly, wearing a floor-length dress. I’m not rushing anywhere

Instead of depicting me as the typical “angry black woman” why not ask where that anger stems from?

As cameras rolled on the meeting, the voices of frustrated Ferguson citizens spread across the Internet. Among these were members of Lost Voices, a youth advocacy group formed in the wake of Brown’s death:

Despite the tension, there was one positive movement, as the council passed ordinances designed to address some of the problems the town faces in the aftermath of the protests:

But while the council meeting was a necessary step forward, not everyone was satisfied.

“City Council ain’t do sh*t tonight. They did nothing.” – protestor reflecting on meeting #Ferguson

First speaker says the next step if for every single #Ferguson resident to register to vote. And then vote. pic.twitter.com/t6PCAMG2li

Joshua Williams: “We’re going to be out there until we get Justice.” pic.twitter.com/HLJyP9W6WE

The protests in Ferguson continued today, with residents staging a shutdown at a city intersection. Police reportedly arrested at least two people.