Ferguson is putting the black in Black Friday.

On Monday, a St. Louis, Mo., grand jury decided to not indict Ferguson Police Officer Darren Wilson for killing Michael Brown, an 18-year-old who was unarmed when he was shot, in August. The decision resulted in a wave of heated, sometimes violent, protests that spread across the United States this week.

Now, organizers have mounted a boycott to “Black Out Black Friday,” aimed to make an economic impact on the year’s biggest shopping day and demand an end to “business as usual.”

Black Friday in Ferguson began with a family-style Thanksgiving dinner on Thursday evening, with prayer, family, and song, courtesy of Reverend Billy and the Stop Shopping Gospel Choir. They then set out by caravan to converge on department stores in the area—the location kept secret until just before they went in. 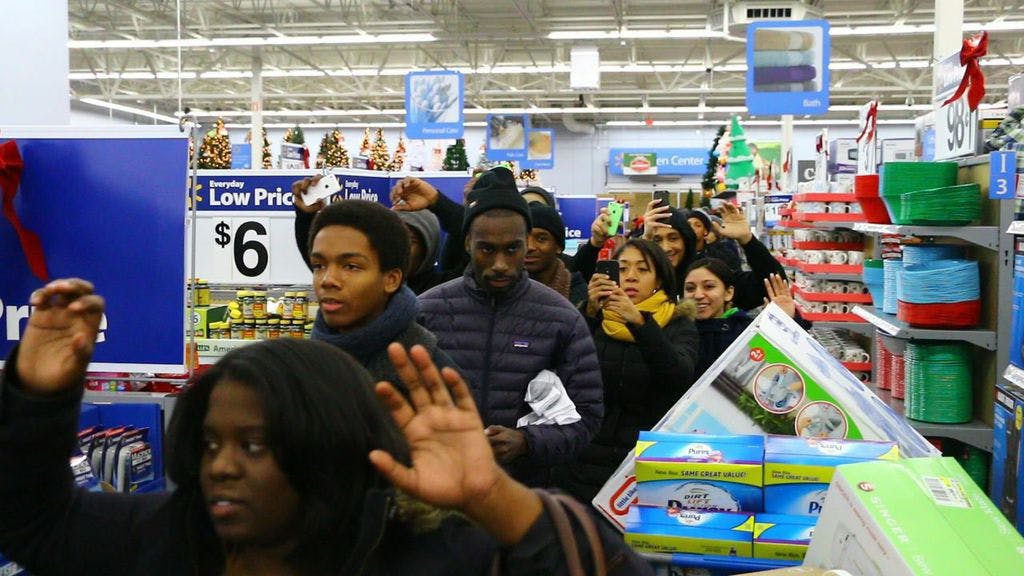 Once inside, they spread out through the store, casually paced the aisles and talked to shoppers until a chant rang out, pulling the swarm together into a united mass. Chants of “Hands Up Don’t Shoot” and “Arrest Darren Wilson” were met with mixed responses, some employees nodding in approval, and some benighted shoppers staring in bewilderment.

The roving caravan of about 250 protesters drove from one store to another to bring their message to three Walmart locations, a Target, and the Galleria Shopping Mall in St. Louis.

Target workers nod in support of #Ferguson #BlackOutBlackFriday protest, which is probably all their boss will allow https://t.co/U11soVMBch

Stores in West County Mall are locking FOR LESS THAN 10 OF US!! #BlackOutFriday #Ferguson pic.twitter.com/LE6U56KXX6

POWERFUL VIDEO: Mall protest in STL where young people "die in" and chant "hands up don't shoot." Mall was SHUT DOWN! https://t.co/taYsLv6bof

The action continued promptly the following morning at 7am to meet the door-busting shoppers.

There were no arrests.

“If I didn’t have this shirt on, I’d be jumping with y’all.”

“We are tired of being treated like animals, like we are thugs, like we are uneducated,” said Pastor Derrick Robinson. “And if we have to shut down every store in this community, change will happen and it will happen now.”

Organizers said the plan to enact a nationwide boycott was hatched before the indictment. Grassroots organizations across the country supported the call under the rallying call “No Justice, No Peace, No Profit.“

Meanwhile, in Oakland, Calif., protesters managed to shut down a Bay Area Rapid Transit (BART) train station for more than an hour by chaining themselves to trains.

Update 1pm CT, Nov. 28: After marching through the mall chanting and shouting, protesters staged a die-in at The Galleria Mall in St Louis and held “speakouts” on police brutality, and continuing the calls for Darren Wilson to be locked up. Police allowed the demonstrations to continue without any intervention, and no arrests were made.

Update 4pm CT, Nov. 28: The West County Mall in Ferguson has closed prematurely due to Black Out Black Friday protests.

Gates are down in all stores, and security is patrolling the mall, asking all shoppers to leave.

Local police, State Troopers and mall security surrounded the protesters immediately after they regrouped inside the mall, giving a stern order that they had two minutes to leave, or they would all be subject to arrest, members of the media included.

The overdone response proved to cause even more of a disturbance than organizers had originally planned – just after being pushed out of the mall, protesters took to the street and shut down highway I-70.

Protesters blocked entrance ramp on I-270 northbound from Manchester at 3:45 p.m. pic.twitter.com/8jjdzTmsWv

Update 8pm CT, Nov. 28: Using a crafty diversion tactic, protesters surprised shoppers with a flashmob at Chesterfield Mall in West St. Louis. At a meeting to regroup and strategize after the previous action, organizers told everyone to blast out through Twitter that they would be converging on South County Mall, on the other side of town.

Having thinned out the number of police, the crowd had enough breathing room to break out into a raucous carnival of drumming and chanting throughout the mall. Shops quickly shut their gates, and security started telling shoppers: “If you are not participating, you must leave the area.” But with the celebratory atmosphere, some shoppers felt comfortable to engage with people. 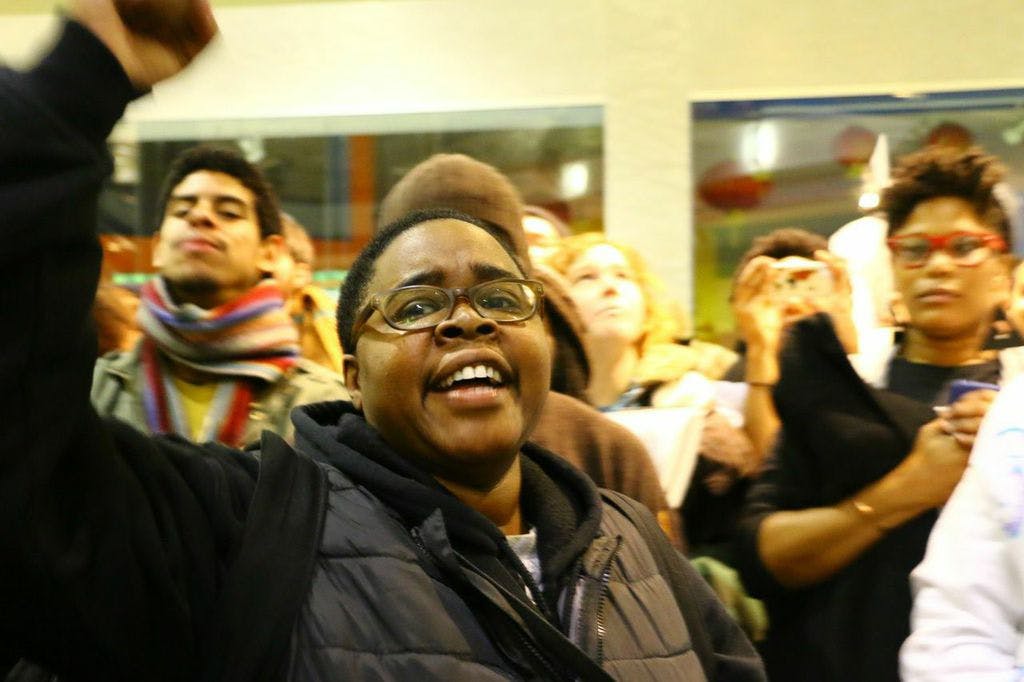 “I was a little startled at first because I didn’t know what was going on, and I’m just here shopping with my friends,” said 16-year old Naomi Blue. “But then I listened to what they were saying, and it looked like they were having fun, so I actually talked to a girl, and it sounds like all they’re asking for is equal rights. And I think everybody should have equal rights.” 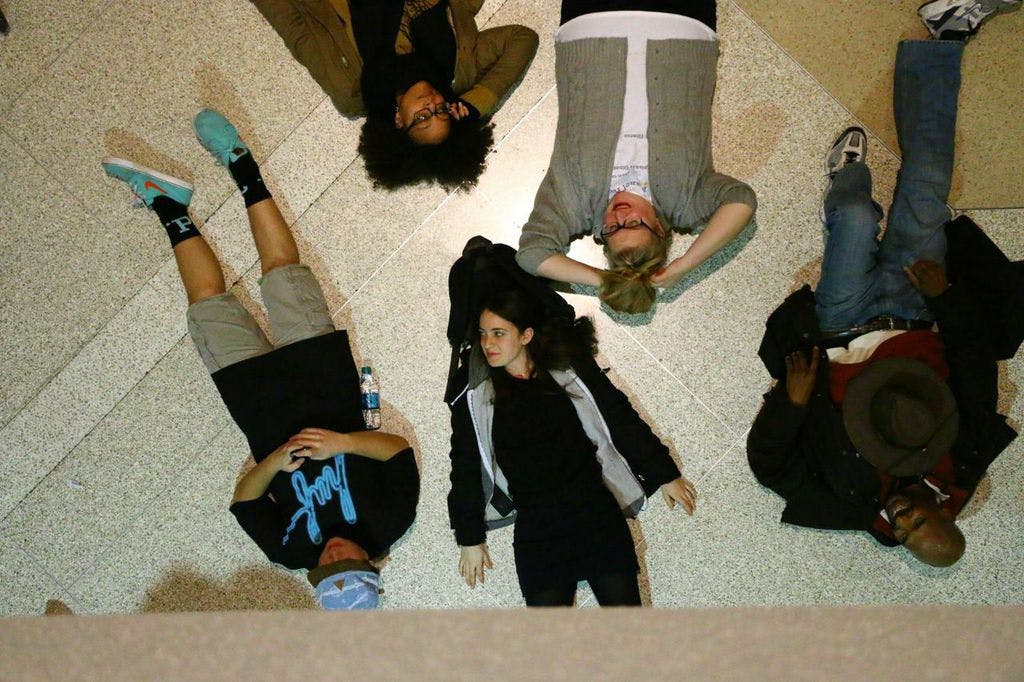 Several mall employees smiled, cheered, and raised their hands in support through the gates of their shops as the procession passed. “I’m with it. I support the movement. If I didn’t have this shirt on, I’d be jumping with y’all,” said an employee of a sporting goods store, who declined to give his name. 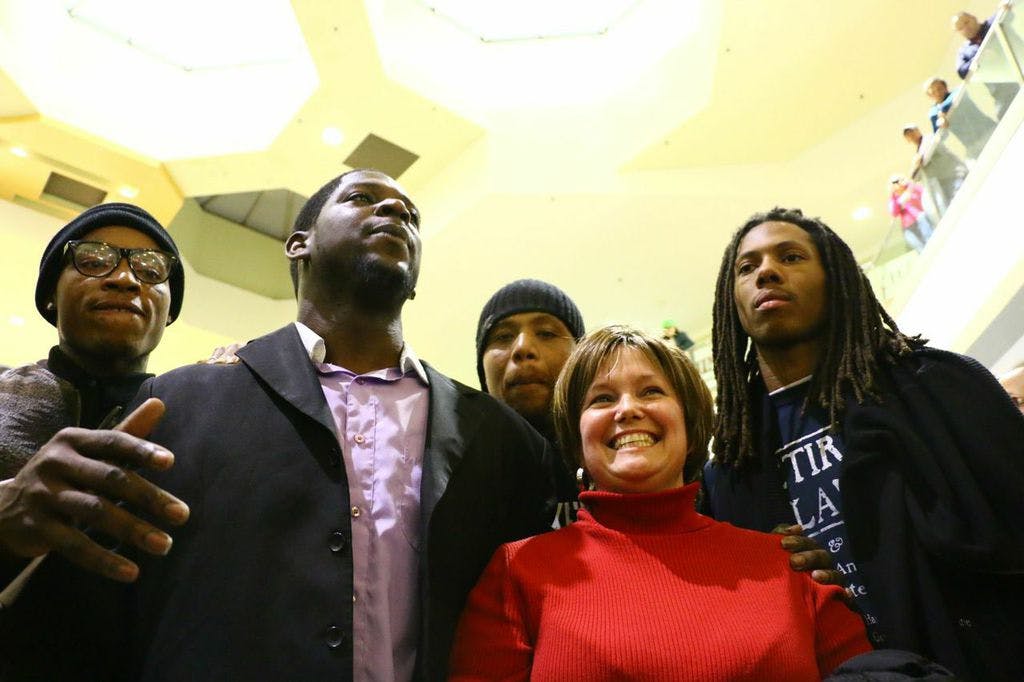 Things ended peacefully, with speeches about unity. Pointing up to onlookers on the mezzanine, Dontey of activist group The Lost Voices bellowed: “All y’all there see that we are here, we are peaceful protesters, and we’re here to have our voices heard. Nobody, not one of us took anything, we didn’t need to loot anything or burn anything to make our point because we’re about unity. United we stand, divided we fall.” The crowd followed by chanting in harmony.

The action concluded without any intervention from police, and protesters dispersed to end the night with a vigil at the Ferguson Police Department.