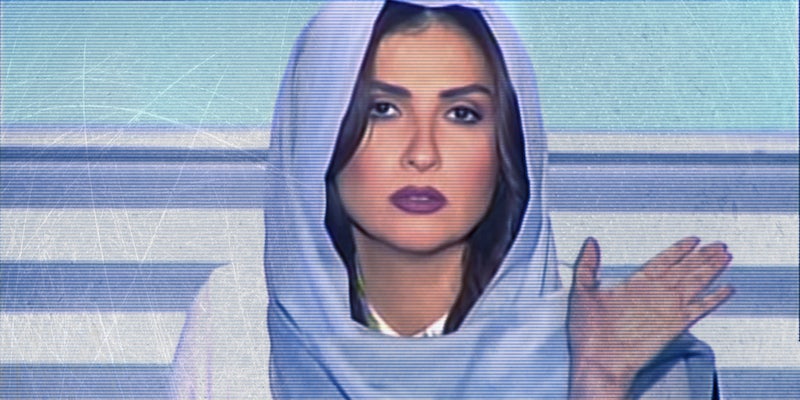 Rima Karaki is making a name for herself as a take-no-prisoners host.

Rima Karaki is a Lebanese TV host who isn’t afraid of a fight.

Things got heated Monday when Karaki was interviewing Hani Al-Seba’i about the phenomenon of Christians joining Islamic groups like ISIS. Al-Seba’i is a Sunni scholar who fled to London after he was sentenced in an Egyptian court to 15 years in prison for being a part of the Egyptian Islamic Jihad. The United Nations considers the group to be an affiliate of al Qaeda.

But despite Al-Seba’i’s extreme ties, Karaki didn’t back down when he disrespected her on Al-Jadeed TV after she politely tried to redirect his historical tangent. Instead of taking his guff, she cut off his microphone when she decided she’d had enough.

The video was shared by MEMRI, a Middle East media watchdog. (Editor’s note: The original video has since been taken down. The version below was reposted by another YouTube user.)

To give you some context, here is a comment Al-Siba’i made on Al Jazeera TV in the wake of Osama Bin Laden’s death.

Sheikh Osama bin Laden fought occupation forces. He never killed civilians, and he never said he did. On the contrary, he extended his hand in peace to Europe and the West, and they were the ones who rejected it.”

Karaki, for her part, is a strong female figure in a country where women’s rights are still commonly ignored. Human Rights Watch released a 114-page report in January called “Women’s Rights under Lebanese Personal Status Laws” that found that women were not considered equals, especially when it came to divorce.

“Not only are Lebanese citizens of various religions treated unequally under the law, but women are treated unfairly across the board, and their rights and security go unprotected. Passage of an optional civil marriage code, alongside badly needed reforms to existing personal status laws and religious courts, are long overdue.”
-Nadim Houry, deputy Middle East and North Africa director

It’s quite surprising that Karaki is not more of a household name. Before she made it in TV, she held a successful position at Lebanon’s central bank. In a recent interview with Fit’n Style magazine, she said her family considered her move to media “an irrational act.”

Her ethos seems to be one of power and strength, as demonstrated in the Al-Seba’i interview.

Some accuse me of being “disrespectful,” since I was the only one to omit my guests’ titles and address them with their first names no matter who they were; I see it as more respectful in fact because we don’t need all the poetry to introduce them.

Others say that I have no limits in my questions; I see this as an added value. Some say that I am not objective; I call it honesty.  For those who describe me as “Not being loyal to or not following any political group,” I see it as cleanness.

Karaki is setting an example not only for Lebanese women, but for everyone in the media who could use a refresher on practicing what they preach.